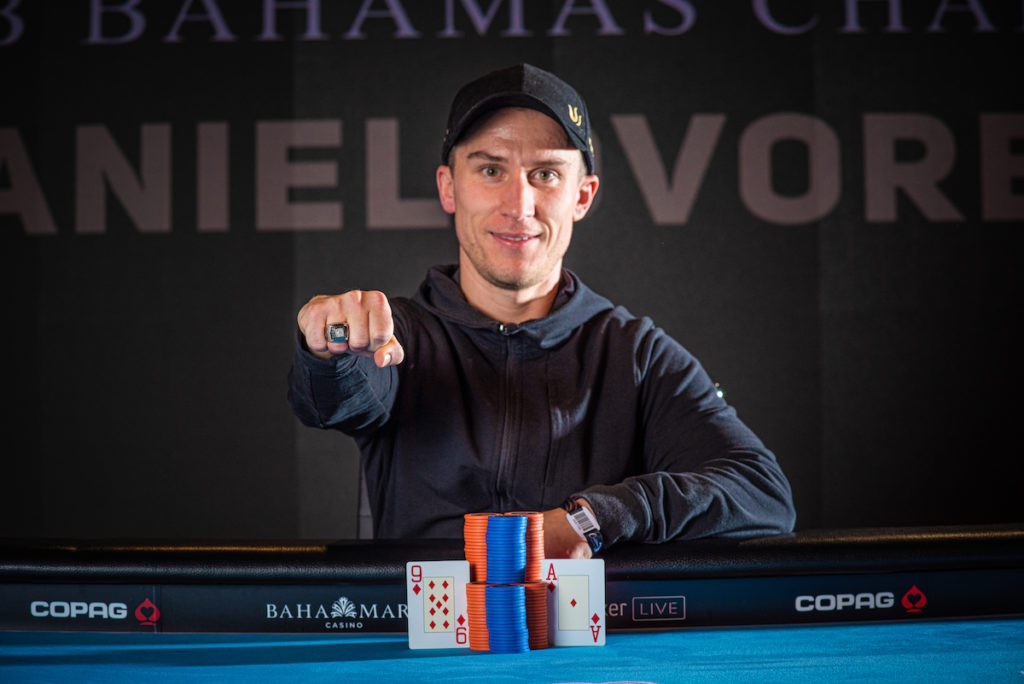 Canadian pro Daniel Dvoress won the Super High Roller Bowl Bahamas to bring his career earnings to $15M-plus with a massive $4.08M score. He outlasted a field of 50 and beat Wai Leong Chan heads up for the championship ring.

“This is the most prepared I’ve felt for a tournament relative to the rest of the field. I felt really comfortable all day and coasted through it without emotional swings,” Dvoress said after his win, having put a lot of time into studying and playing the last couple of months.

“It all kind of came together in this event,” Dvoress said, despite having to re-enter into this event after busting on Day 1.

Dvoress began the final table fifth in chips but immediately ascended the ranks in a hand against Koon.
Holding Q-10 suited, Dvoress flopped a flush draw with a double gutter against Koon’s bottom set. Dvoress check-called bets on the flop and turn before rivering a flush. Dvoress checked a third time and even though Koon checked behind, that pot propelled Dvoress to second in chips. He held the chip lead briefly as players began to fall.

Two-time Super High Roller Bowl champion Bonomo departed in eighth place, followed by Koon in seventh and O’Dwyer in sixth before Dvoress got back in on the action. Davies, who began the final table as the chipleader, was short-stacked and facing a decision on the river for his remaining stack. After using four time-extensions, Davies called all-in with king-high on a paired board, but Dvoress tabled two pair to end Davies’ run in fifth.

That left the remaining four players with comfortable stacks ranging from 53 to 77 big blinds, but Dvoress decimated Seidel’s stack in a riveting hand. Seidel had flopped a flush draw against Dvoress’ bottom set and when Seidel made a pair on the turn, he check-called a hefty bet from Dvoress. The river improved Dvoress to a full house and when Seidel checked, Dvoress shoved with just a slightly small stack. Seidel went into the tank for about six minutes, using 12 of his time extensions before he called and saw the bad news. He busted the following hand to finish in fourth place.

Dvoress appeared primed to get play down to heads-up shortly thereafter, flopping trips against Chan’s overpair. Chan got his chips in with just a 9 percent chance to survive, but immediately turned a full house to survive and double into the lead. Dvoress found his own double through Chan about a half-hour later to retake the lead and from there, he never relinquished it.

He steadily increased his lead while Chan and Lehne’s stacks began to dwindle. Eventually, Chan made a stand with pocket sixes and ran into Lehne’s pocket aces. Unfortunately for Lehne, though, Chan spiked a two-out river to eliminate her in third place.

Heads-up play began with Dvoress holding just below a 2:1 lead and he never let his opponent gain momentum, slowly chipping away at Chan’s stack over the course of the next 90 minutes before closing it out. With an 8:1 chip lead, Dvoress’ A-9 suited held up against Chan’s J-7 to seal the deal.