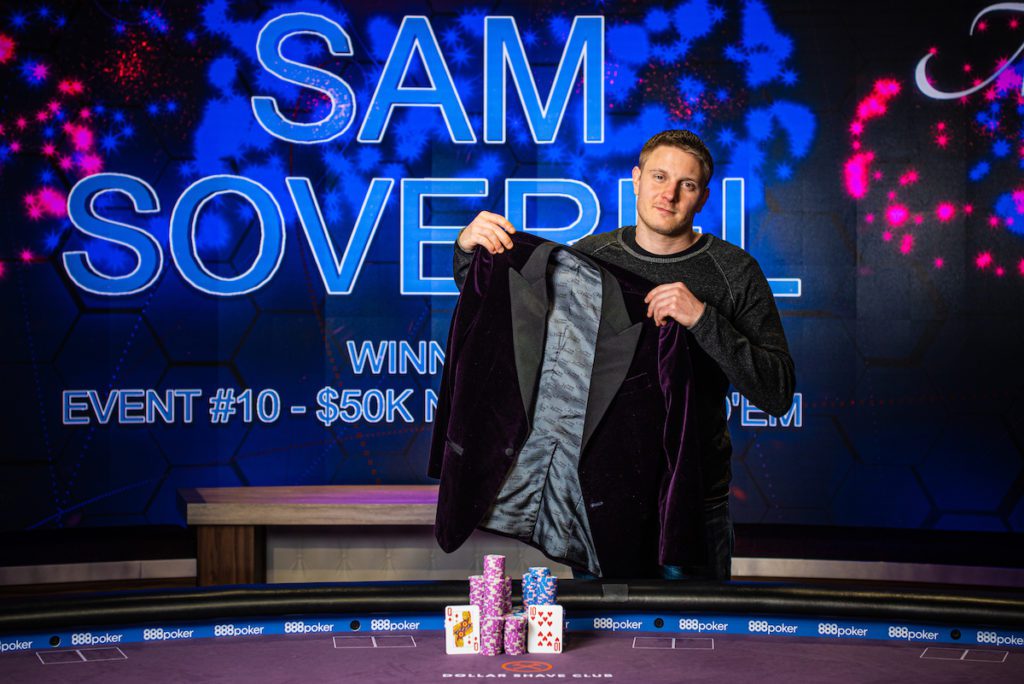 In what will go down as one of the most impressive showings in a tournament series, Sam Soverel closed out his historic Poker Masters championship run Thursday by winning the $50K main event for $680K in Las Vegas. In total, Soverel recorded seven final tables across 10 events, cashing for a total of $1.4M, including the $100K top prize for being the top points-getter.

On the final day of the series, Soverel both beat Chris Hunichen heads-up in the final event as well as receiving the purple jacket from the hands of 2018 champion Ali Imsirovic.

“It’s exciting to win,” Soverel said. “I just like being in action all the time and when you win you get to play the longest.”

About his play, his performance, and dominance, Soverel said, “A lot of the guys I thought were really good I saw make mistakes online recently and I actually think now that the playing field is a lot more level than I originally thought.”

While Soverel doesn’t make any claims on where he stands on the hypothetical global ladder of tournament players, he admitted he feels much more comfortable than before.

“I’m glad I don’t feel like I’m at a big disadvantage when playing these guys whereas in the past I kind of felt like that. I come from a cash background and I know I didn’t study enough and understand things like the impact of the big blind ante, but I understand it a bit better now and I think that my live background helps me a lot in the rest of the game.”

The final table started with six players of which one would go home empty-handed. That player turned out to be Imsirovic, who busted on the bubble when his top pair top kicker failed to hold up against Chidwick’s straight and flush draw. The river gave Chidwick a straight and Imsirovic busted in sixth place.

The next big clash was between Davies and Soverel as the former picked up queens against the latter’s kings. This hand sent Davies to the rail and Soverel asserted himself as one of the biggest stacks trailing only Hunichen. Busting in fourth place was Chidwick, who found himself in similar trouble as Davies, running queens into kings. This time it was Hunichen who had kings and Chidwick exited.

Fox maneuvered himself into the top three but at that point, he got coolered by Soverel, full house vs. full house.

The heads-up battle did not last long as on the final hand, with Hunichen facing nearly a 4-to-1 disadvantage, Soverel put him all-in with Q-10 and Hunichen called it off with deuces. Soverel hit a queen and ended the tournament.