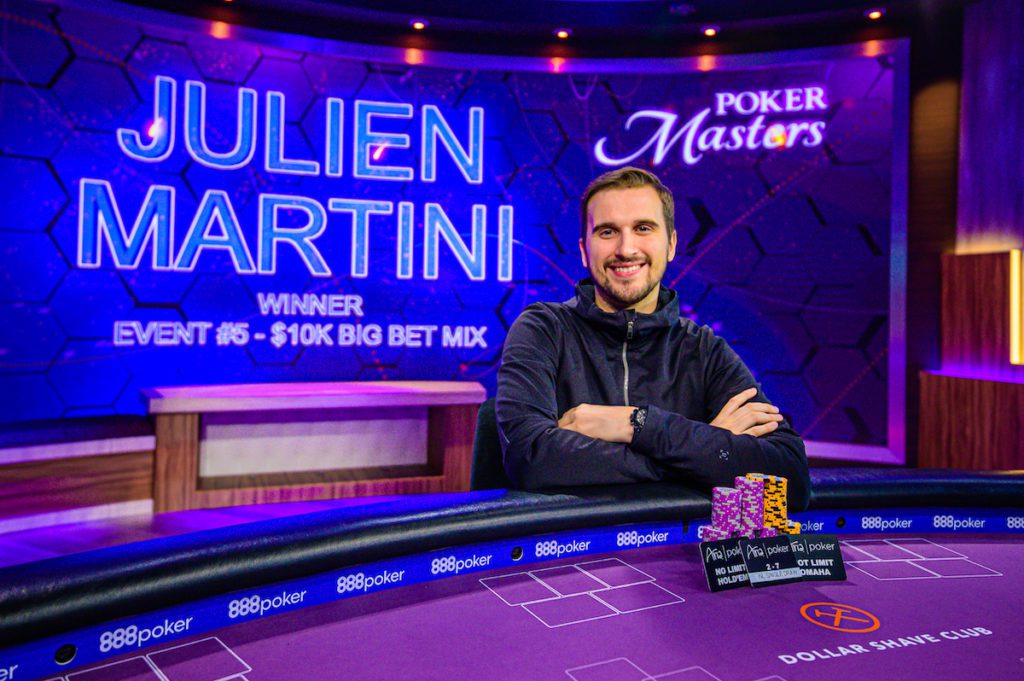 French poker pro Julien Martini was down to just half a big blind three-handed in Event 5 ($10K Big Bet Mix) of the Poker Masters in Las Vegas but that didn’t stop him from mounting an epic comeback and taking the win.

Martini beat Jorryt van Hoof and Kahle Burns on his way to victory and with that, he took home $166,400.

“I came to the Poker Masters because even though I’m having an incredible year I didn’t have a single win and I really wanted one. I’m very happy to get this one!” Martini said as he’s at $4.5M-plus in tournament cashes.

The action started with six hopefuls remaining lead by Stephen Chidwick who held 65 percent of all the chips in play to start, but it became clear very quickly that this was not going to be his day. Chidwick doubled up numerous opponents during the early goings of the final table before Pedro Bromfman was the first player to bust out. Bromfman busted in No Limit 2-7 Single Draw where he was drawing to a 10-7 low but he wasn’t able to beat Kahle Burns who drew to an 8-6 and made his hand.

Moments later, Chidwick busted out in NLHE when he jammed J-9 suited and got called by Sam Soverel who tabled A-Q. Soverel’s hand held up and that vaulted him into the lead closely followed by Burns. Soverel’s chip lead was short-lived as he was the next player to get eliminated during a hand of 2-7 Single Draw. Soverel drew one to an 8-6 low versus Burns who held a pat J-8 low. Soverel did not hit his draw and exited in fourth place.

The three-handed battle went back and forth for quite some time and while Kahle Burns extended his chip lead, it was a clash between Julien Martini and Jorryt van Hoof that seemingly pushed this event to its heads-up stage. Martini doubled up Van Hoof and was left with less than one big blind, but miraculously he managed to get back in the game, leading to a crazy three-way all-in.

Van Hoof moved all in with a 10-7 draw, Julien Martini moved all in with J-8 and from the big blind, Kahle Burns called with a J-8. Burns tanked for a while before standing pat with his hand, Van Hoof threw two cards to draw to a 7-5-4 after which Martini drew one card to an 8-7. Burns’ pat hand did not hold up as Van Hoof turned his hand into two pair but Martini made his 8-7 to knock Van Hoof out and doubling through Burns.

Martini and Burns then started a slow and steady heads-up battle that lastest for nearly an hour before the latter got felted. On the final hand, Martini put his incredible poker skills on display when raised with ace-eight and Burns called with king-three. The flop brought out 10-5-4 and Burns check-called a small bet before the jack of spades hit on the turn. Both players checked on the turn and the river completed the board with the third spade, a deuce.

On the river, Burns moved all-in for 3M with 1.5M in the middle and Martini made the call with ace-high to win the tournament.