Plans can change after careful thought at the poker table 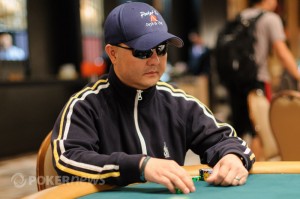 In my last column, we began analyzing a hand from a $1-$2 cash game where we were new to the table, sitting with $200, and after an under-the-gun limp and another call, we had

in the cutoff seat. Based on all of the factors in this situation, my preference was to fold. Now, let’s look at what our hero did in the hand and evaluate how we should proceed based on the ensuing action.

Our hero raised to $15; action folded to the UTG player, who called, as did the UTG+1 limper. Our first job is to take the preflop information of these two players and narrow their range before we see the flop. Since these players limped from early position and didn’t raise, I would eliminate any extremely strong hands from their range. I’m going to make a mental note the early position limps from these guys aren’t likely to be trapping maneuvers and my best guess is they have small or medium pairs, suited connectors and possibly Broadway cards that weren’t good enough to raise with in their estimation. If either had anything much stronger, they likely would’ve raised, so it looks to me like they were playing pretty straightforward. This gives me a lot of information about their basic skill level and hand strength.

, which is a monster flop for our hand. The UTG player checks and UTG+1 leads into us for $10. What do we make of this small bet into the $48 pot and what should we do? I find this spot really interesting, as when I really smash a flop like this my first thought is “What is the best way to get the money in the pot?” Often, the best way to get more money in the pot is to play it fast to try to inflate the pot, but let’s not be too hasty as we have to think about his range since he has led into us. Think about this for a minute; what does he likely have and what should we do?

When we are the preflop aggressor and someone leads into us, we’re usually facing a mediocre hand trying to “find out where he is” or a monster hand trying to induce us to play a big pot. His range of mediocre hands could be Kx, which I would narrow to most likely K-Q, K-J or K-10 since he would be much more likely to raise A-K preflop and less likely to be playing K-9 or worse. He could have a flush draw with

or any other suited connectors. We’re holding

so that rules out most of the bigger card combinations. I also think he could have a pair between the king and seven and is making a weak lead to try to pick up the pot. Other likely holdings based on this weak lead could be 5-5 or 7-7 for a set and this bet is designed to induce action. If he has two hearts or if he has a king, I don’t want to raise here because if he has worse hearts or a weaker king, I want him to stay in the pot, and if he happens to have a set, stronger king, or the nut-flush draw, I don’t want to lose too much on this hand.

So, while it is true that it appears we have smashed this flop, our goal of trying to get the money in the pot becomes quite a bit more dynamic. We don’t want to get a lot of money in the pot if we’re behind and we don’t want to lose our opponent if we’re ahead. Based on these factors, the best play for me is to call. If he has us beat, or is drawing to the nut flush, he’s never going to fold and if we have him crushed, then we don’t have any reason to raise and get him out of the hand. We have a strong hand, but not one I’d be looking for maximum value on as we’re going to have a tough time getting a lot of value out of a weaker hand and we’re just going to lose a big pot if we’re behind.

Apply these concepts to your hands. Most of the time we’ll be in pots where we’re trying to maximize value or control the size of the pot and get to showdown cheaply, but situations like this come up much more often than most players think.

In my next column, we will find our how our hero played the rest of the hand. Until then, Decide To Win!

— Lee Childs is the founder and lead instructor at Inside the Minds. For information about his group training sessions and personal coaching, visit inside-the-minds.com.