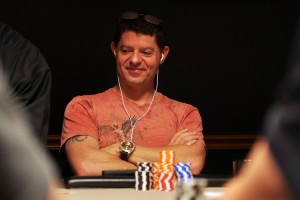 Last week, PokerNews reported on an upcoming public auction being held by the U.S. Internal Revenue Service that featured the Corum bracelet and Corum watch champion Jerry Yang received for topping 6,358 entries in the 2007 World Series of Poker Main Event.

The listing was posted "under the authority in Internal Revenue Code section 6331, the property described below has been seized for nonpayment of internal revenue taxes due from Taxpayer." Furthermore, the Notice of Encumbrances listed several tax liens against Yang, including a federal tax lien for $571,894.54. According to the IRS website, "a federal tax lien is the government’s legal claim against your property when you neglect or fail to pay a tax debt. The lien protects the government’s interest in all your property, including real estate, personal property and financial assets."

PokerNews reached out to Yang for comment on the situation, and while he politely declined our request, he asked that we transcribe his comments from his March 15 interview with Mark Hoke on Fifth Street Radio. Hoke has been kind enough to grant PokerNews permission to post excerpts from that interview.

Here are some highlights from that interview:

Jerry Yang: For those of you who know me, many of you know that I’m a straightforward guy. You know, I don’t run away from my problems, beat around the bush, and that is why I volunteered this time. No one asked me to come on Fifth Street Radio. I personally contacted Mark and I wanted to be on because I feel like, as a world champion, I owe an explanation to my fans, to other fellow poker players, to the poker community, and to all my friends out there, whether it’s Facebook, Twitter or friends that I have met throughout my poker tours.
…

Many of you knew, or know, that immediately after winning I did donate the 10% that I promised God and in front of ESPN cameras that I would donate to the Make-A-Wish Foundation, Ronald McDonald House and also Feed the Children, which I did. The one mistake that I made was I should have paid my taxes before I made the donations. After I made my donation to those three organizations and some other organizations, my church, and helping my relatives, friends and siblings, I began a business, a restaurant.

I did pay my state taxes, over $900,000. Unfortunately, I’m not going to blame anybody but myself, but I encountered people that I thought I could trust and would give me good advice, but unfortunately some of the people that I hired or got on my team were advising me in the wrong way, if you will. So I did make some mistakes, and what made the matter worse was that in April of 2008, when it was time to pay the federal tax, there was a financial crisis with the Bank of America, and that’s where I put my money in. Unfortunately, all my funds were locked away, were frozen if you will, and so I wasn’t able to pay my federal taxes on time. Due to penalties the amount that I owed at that point, after I paid everything, I owed roughly between $150,000-$170,000 due to penalties and things like that. That’s why I owe the IRS a little bit more than that today. That is basically the story. Again, I don’t have anybody to blame but myself.

Mark Hoke: Are you sitting in OK shape right now? What’s happening with your financial situation at this point?

I am OK. Thank God I started the restaurant and the restaurant is doing fairly well, so I’m OK. I’m in the process of negotiating with the IRS, and hopefully we can come to some sort of agreement and maybe have some sort of installment payment. Recently, I had to acquire a CPA and she is working on my case. Unfortunately, I won’t be able to discuss any further than that. The team at the Internal Revenue Office seem like they want to cooperate with me. They’ve heard about me, they know about my reputation, they know about my background, and they seem to be sympathetic… bottom line is, you take responsibility, you fix your problem, and you go on with your life. That’s what I’m trying to do.

Hoke asked about the possibility of Yang reacquiring his WSOP bracelet. Yang responded:

You know, I’m not going to comment on that. The possibility is always there, but if I lose them I lose them. I hope not, hopefully my CPA can maybe talk them into holding on to it until we can come up with some sort of agreement. That is my hope and my prayer, especially the bracelet. It has a sentimental value, and it means a lot to me, but again, I’m in this mess so I’m just going to do my best. That’s all I can do. I’ve got my kids to worry about, my wife to worry about, my business to worry about… I still love poker and I still intend to play poker in the future, so many of you will see me out there. Jerry Yang will not go anywhere. If I survive a refugee camp and a communist invasion of my country, I know I will survive this.
…

I have not been smart with my money, that’s my problem. I helped my parents, I helped my relatives, people coming out of the woods and asking for a handout, being Jerry Yang and because of my background, I was very poor… I think that’s my problem right there, I need to learn from this experience, I need to be strong and to be smart with my money, and not giving it away like leaves falling from a tree. I think that’s the first mistake that I made. I should have paid my taxes before I donated the 10%, that’s what I should have done. So there were a lot of mistakes on the way that I made, and again I don’t blame anybody but myself.

You can listen to Yang’s entire interview on Fifth Street Radio below. His segment begins at the 47:25 mark: