Home Poker When someone gives you money at the poker table, take it 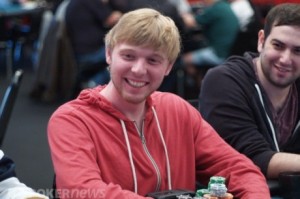 Here’s a little tip that will make you a lot of money: When someone wants to give his money away, take it. Sounds simple enough, but it amazes me how many players are terrified of executing on this concept. I’ve played quite a few times at Revel in Atlantic City over the past few months because it enjoys the unique distinction of being the plushest, most comfortable poker room in the country along with hosting some profitable games. That’s quite a combination and I’m fairly certain the two are connected. The luxurious setting of the room and the property attracts some well-heeled players looking to throw away some entertainment dollars. Couple that with some regular nits and you have a recipe for success.

Let me offer a real-life example: The last game I played was typical of the action there. I was playing $1-$2 no-limit hold’em 10-handed. One player was committed to giving away his money. I was committed to being the recipient of his largesse. The remaining eight players were nits. The reckless player, who we will call Charlie, was at the opposite end of the table so my end could whisper freely about his play. Everyone knew he was going to go through his stack. Yet, I knew the action wouldn’t last forever. So I wanted to put myself in the best possible chance to take the money.

When I got to the table, Charlie would raise every hand preflop to at least $10. If someone else open-raised for more, he would call. I didn’t see anyone reraise Charlie. He would fire two more bullets but never a third. His play was exploitable. I tried to isolate him as much as possible when I had playable cards. If I had a medium-strength hand, I would call him down. If I had a strong hand, I would wait to raise. If I had air, I would float him and take it away on the river.

Meanwhile, everyone else played scared. They all seemed to be waiting on aces to make their move. The consequences? Charlie continued to take money from the nits and redistribute it to me. I had the best of all worlds. On one hand, the player next to me (who had nines) called Charlie preflop. The flop came 10-5-3. Charlie bet and our nit folded, too scared to take on Charlie with anything less than the nuts even though he doubted Charlie had much of anything. Charlie flashed his 7-2 and I suppressed a chuckle. Shortly thereafter, I busted Charlie for the night. One player exclaimed, “Now we can play some poker.” Everyone nodded in agreement. What the nits failed to realize was their best chance for a profit had left the room.

— David Apostolico is the author of Tournament Poker and The Art of War. You can contact him at thepokerwriter@aol.com.