And the Ante Goes To … 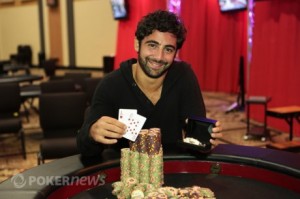 It’s Election Year in America, and while you might not think your vote matters in November (it does, by the way), we can say with unquestioned certainty your vote has mattered with Ante Up! We want to thank you for sharing your views and selecting our coveted “Antes” winners. If you participated, proudly wear an “I Voted!” sticker today and check your email inbox. You might have won one of our 72 great prizes. Ken Allard of Massachusetts was our grand-prize winner and will enjoy lunch and a poker lesson from world champion Chris Moneymaker! Here are the results of our survey.

WHAT IS THE MOST ANNOYING TRAIT IN OPPONENTS? Lloyd Dobler from Say Anything questioned relationship advice from a bunch of guys sitting alone outside the Gas ‘N Sip. So we have to wonder why the guy who’s constantly sharp-toothed about how terribly everyone else plays, is playing $1-$2 no-limit himself. It’s because he’s just as bad as the rest of us, and that’s the only thing he doesn’t seem to know.
Knows it all, 46%
Smelly, 25%
Hollywooding, 16%
Chatty, 8%
Texting/tweeting, 6%

WHAT DO YOU LOOK FOR MOST IN A TOURNAMENT? Poker room managers should take note of the most surprising change from our last survey, where poker players confirmed their reputation as being all about the money. This year, what our readers appear to be telling us is if a poker room has a tournament that offers good play, guarantees some money and doesn’t front-load the prizes, then those readers are willing to pay for it in the form of larger entry fees.
Blind structure, 43%
Guaranteed prize pool, 23%
Payout structure, 23%
Buy-in-to-rake ratio, 10%
Rebuys/add-ons/re-entry, 1%

WHAT DO YOU WANT MOST FROM THE JACKPOT RAKE? What’s this? Are poker players finally understanding how odd it is that in a game of skill that a dollar is being dragged from every pot and returned to the players in a purely random fashion? Nah, we couldn’t be that lucky. But last year, this was split evenly, so we’re making progress – especially away from the bad-beat jackpots, which suck more money out of the poker economy than the U.S. Department of Justice.
Let me keep my buck (or two), 38%
High-hand bonuses, 34%
Bad-beat jackpot, 29%

WHAT KIND OF TOURNAMENT DO YOU PREFER MOST? Re-entry tournaments have taken the poker world by storm in the past year or two, allowing you to buy back in after the idiot in Seat 10 calls off his chips on a baby flush draw and hits his “one time” to send you to the rail. The trend, easily eclipsing rebuys, has resulted in bigger fields and more prize money, but it turns out that not a lot of people like seeing a player they just felted back in the tournament.
Re-entry, 13%
Rebuy, 5%
Both, 7%
Neither, 75%

WHEN ONLINE POKER IS REGULATED, WHAT TYPE OF REGULATION DO YOU PREFER? Sorry, folks. Neither political party made online poker regulation part of its platform for this year’s elections, so unless Harry Reid and John Kyl find a way during the lame-duck congressional session this winter to hammer out some back-room deal to attach poker regulation to some hugely important national security bill (when has Congress ever done that?), you’ll have to move to Nevada or Delaware or one of the handful of other states who are staking a claim to the Internet’s next big gold rush while Washington turns a blind eye.
Interstate (federal regulation), 77%
No regulation, 18%
Intrastate (state regulation), 5%

SINCE BLACK FRIDAY, WHERE DO YOU PLAY ONLINE? Yeah, April 15, 2011, really sucked, didn’t it? When Preet Bharara put the hammer down on our freedom to multitable 18 SNGs simultaneously while sitting in our PJs and chatting with an opponent in Sweden using the screen name RiverRatt, we didn’t really know where to go to get our online poker fix. About a third us just quit, while another third tried to wade through a field of 5,678 runners in a freeroll for the winner-take-all prize of a World Series seat. Brick-and-mortar rooms look to have won our attention, but without the feeder money that comes from our Aunt Judy trying out no-limit hold’em with nickel small blinds, no one yet knows how devastating Black Friday was.
Free sites, 32%
Money sites, 25%
Subscription sites, 13%
I don’t play online, 30%

IF YOU COULD TAKE OVER YOUR FAVORITE POKER ROOM FOR ONE DAY, WHAT WOULD YOU CHANGE? This open-ended question is always a crowd-pleaser, with interesting ideas such as “free chocolate and wine for the ladies” to “stop cooking fried food 10 feet from the poker room.” But overall, here are some trends we noticed:
Tournaments: Not surprising, based on the responses to other questions in this survey, tournaments are a hot-button topic. Readers always look for lower house fees and longer levels, but quite a few would like to see more single-table tournaments and step tournaments that make it easier to qualify for bigger events.
Game variety: Plenty of players are tired of only finding no-limit hold’em in their poker room. They want Omaha, stud, mixed games, six-max tables and dealer’s choice options spread more often.
Renovations: Always a popular answer, readers again are looking for poker rooms to spruce up their joints, from replacing lighting and chairs, to adding more space between tables, improving information on monitors and adjusting the thermostat.
Rules: Enforce them. All the time. And the same each time.

WHAT’S THE BIGGEST FACTOR WHEN DECIDING IN WHICH POKER ROOM TO PLAY? The old mantra we learned in business school of “location, location, location” doesn’t seem to apply as much anymore. A third of our respondents still need something really compelling to drive past the poker room closest to their house, and that something compelling this year is tournaments. Factoring in the other tournament questions in this year’s surveys, offering lots of tournaments will get players to cross the tracks and visit your room; offering tournaments with great value will keep them crossing the tracks.
Tournaments, 35%
Location, 34%
Cash-game variety, 16%
Staff/management/dealers, 10%
Promotions/jackpots, 6%

WHAT PLAYER WOULD YOU MOST LIKE TO SEE RUN FOR PUBLIC OFFICE? As often as poker players’ rights are trampled on or flat-out ignored from state legislatures to U.S. Congress, we sure could use some people representing us who have common sense on poker issues. It’s no surprise Mike “Poker’s Ambassador” Sexton came out on top, as his intelligent, well-spoken defense of poker has been heard on Capitol Hill more than once. But keep an eye on Greg Raymer, who is a devout Libertarian, a party that does support poker freedom.
Mike Sexton, 36%
Greg Raymer, 27%
Barry Greenstein, 26%
Annie Duke, 7%
Allen Kessler, 4%

WHAT ORGANIZATION HAS DONE THE MOST TO PROMOTE WOMEN IN POKER? Let’s start with this: There aren’t nearly enough women enjoying the Great American Card Game as there should be. The reason we have as many as we do is because of the tireless efforts of all four of these solid organizations. Tops this year is LIPS, founded by Lupe Soto, who also created the Women in Poker Hall of Fame, which each year honors the women who have blazed a path for others to follow. And that’s something all women who are introduced to the game each day should strive for, no?
Ladies International Poker Series, 51%
High Heels Poker Tour, 29%
Woman Poker Player Magazine, 11%
Pink Ladies Poker Tour, 9%

WHO IS THE BEST POKER TWEETER? It’s no surprise Kid Poker won this Ante as he’s consistently chosen among the most popular players on the planet in most polls. His tweets often inspire reaction (good or bad) and usually has the Twitter-sphere abuzz.
Daniel Negreanu, 54%
Kevin Mathers, 17%
Doyle Brunson, 12%
Matt Savage, 11%
Jason Mercier, 7%

WHICH PLAYER WOULD YOU LIKE TO TAKE AS YOUR DATE TO YOUR HIGH SCHOOL REUNION? Here at Ante Up, we like to be a little more creative than to ask the standard “who’s hottest?” question, which only serves to objectify male and female players. (Well, mostly female. OK, always female). But there also was no requirement that readers choose the prettiest players on this list to impress the classmates who gave them wedgies 10 years ago. So we were happy to see that readers recognized the game-theory smarts of PokerStars’ GoDaddy Girl Vanessa Rousso and the positive personality of High Stakes Poker host Kara Scott in deciding on whose arm they want to hang when they return to Rydell High. And yes, sigh, both are attractive to boot.
Vanessa Rousso, 24%
Kara Scott, 22%
Liv Boeree, 18%
Tiffany Michelle, 9%
Patrik Antonius, 7%
Phil Ivey, 7%
Gus Hansen, 6%
Karina Jett, 5%
Chad Brown, 2%
David Williams, 2%

WHICH OF THESE PRO WOULD YOU LIKE TO INVITE TO YOUR HOME GAME? Since Phil Laak and Antonio Esfandiari are like peanut butter and jelly, you rarely see one without the other – we think we’re safe to assume the combined 49 percent who chose one or the other were gambling that they’d get a two-fer to show up to play Follow the Queen while guzzling cheap beer and munching on stale pretzels in their basement with their buddies.
Phil Laak, 29%
Jen Harman, 20%
Antonio Esfandiari, 20%
Phil Hellmuth Jr., 19%
Mike Matusow, 12%

WHAT IS THE BEST POKER BLOG?
If Negreanu is the most popular tweeter, then it stands to reason he’d have a good chance at winning another Internet social category, and damn if he didn’t win this one, too, for Full Contact.
Full Contact Poker, 37%
Phil Galfond, 36%
Poker Grump, 12%
Hard Boiled Poker, 11%
Shane Schleger, 4%

WHAT IS THE BEST POKER AUDIO NETWORK? Players should be rejoicing that the burgeoning world of podcasting has evolved into complete poker audio networks, with a mix of recorded and live programming every night of the week. Ante Up is proud to have its pokercast rebroadcast on all of these networks, and to be featured guests on some of them, too. Rounder’s Radio reigns supreme, but strong showings from the other nominees prove rounders have a variety of shows to plug in to week in and week out.
Rounder’s Radio, 33%
On Tilt Radio, 27%
Fifth Street Radio, 22%
HoldemRadio, 18%

One of the things poker players everywhere should be rejoicing about is that poker continues to spread across the United States. Just a decade or so ago, most poker players had to hop on a plane to be able to win some stacks of high society. These days, most every player lives within an easy drive of a poker room – with more opening regularly in new destinations. Our final series of questions showed Las Vegas is the undisputed king of poker action, while South Florida is the hottest new destination. And if you live in Utah, well, don’t live in Utah if you like to play cards.