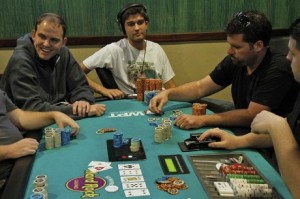 For the past four months I’ve been giving pot-limit Omaha lessons to a longtime friend. He had a bad start, making a lot of beginner mistakes, but I was determined to make him a winning player. After three months of slow progress, it just seemed to start clicking for him in the span of a week.

He wasn’t bringing home 20 buy-ins a day or anything, but what he did seem to have was a greater understanding of the game. He started asking me more relevant questions about hands and followed the action better. I asked him what the difference-maker was.

“I stopped taking your poker advice literally,” he said with a smirk.
All through our training sessions, which were just him coming over to hang out and watch me play, I thought the best way to teach him would be to talk out my strategy about the specific hands while he jotted down what I said:

• Overpair and flush draw is flipping against two-pair hands on moderately connected boards.
• On a paired board, bet half-pot in position with your entire range.
Then, armed with hundreds of hand-specific one-sentence notes, he started to grind, and failed. Months had gone by where he was just losing money. I told him to put in more volume, come over and watch me more and take more notes. He put in the work, doing everything I said, but still the progress wasn’t coming.

He told me he was on the verge of giving up until he found a book; a book on poker theory. Reading it he realized he was looking at my notes completely wrong.

When I gave him my strategy he would take it as advice for only that situation (i.e. bet when there is a K-J-4 two-diamond board and you’re checked to in position with K-J-8-9 rainbow) instead of viewing it from a theory standpoint (i.e. if checked to here we believe we have the strongest hand and to protect our equity and prevent our opponent from seeing a free card that could improvehisequity, we must bet.)

He started to see how there’s an underlying logic to each situation that could apply to countless other hands in every poker game. He went through all of his previous notes and distilled them down until he found the theory at the core. This was what happened that week it all seemed to click for him.

We should’ve started with theory instead of unique situations. I like to use a musical analogy when explaining why this is bad: Would you become a better musician faster by learning specific songs through tabs or by learning how to read actual musical notation?

One teaches you how to play one songreallywell. The other, with time, gives you the power to play any song you want on the fly. With poker, which has almost an infinite amount of variations, learning specific hands (orsongs) just isn’t viable. Mastering theory is key, and when you do, you have the tools to handle any hand that comes your way.

— Jay Houston is a Team Pro with DeepStacks and a PLO specialist who crushes the mid-stakes online cash games.