A mathematical look at bluffing 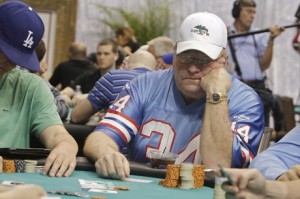 Editor’s note: The following is an excerpt from No Limits, a book from Chris “Fox” Wallace and Adam Stemple. Go to nolimitsbook.com for more information.

The basis of bluffing strategy is a simple pot-odds calculation. In its simplest form it can be stated as: The chances of your bluff working must be higher than the odds you are getting from the pot.

Some people prefer to look at the money they put in as part of the pot. In the example of betting $1 into a $2 pot, your bet is $1 of the $3 that’s now in the pot. This means your opponent must fold one out of three times for your bluff to break even.

Below, the formula is broken down as a simple algebra problem for readers who think in terms of variables and equations.

The Bluffing Formula
For a bluff to be directly profitable (not counting table image or future rounds) you need to consider your pot odds and the chance of any particular bluff winning the pot right there.

For the bluff to be profitable the ratio of P to B must be greater than O.

Any other factors (draws you might have that could win the pot later, or the possibility of a scare card coming to win you the pot) can add to the profitability and lower the percentage of the time you need your bluff to win to be profitable. The possibility you may win the pot even if you are called can also make your bluff profitable. But if you may win a showdown and your hand isn’t good enough to value bet, then a bluff is usually the wrong play.

Some quick problems to help test your knowledge of the bluffing formula:

Q: You bet $50 into a $150 pot because you think your opponent was on a draw and missed at the river. How often does he need to fold to make the bluff profitable?
A: Your pot odds here are 3-to-1, so you need your opponent to fold about once for every three times he calls (or about 25 percent of the time) to make this bluff profitable. If you think there is a reasonable chance your opponent was on a draw, then a small river bluff can be profitable. Be careful you don’t make this bet only as a bluff, but also sometimes bet small with your real hands on the river to get paid off and let your opponents know they can fold to your small river bets if they don’t have a real hand. You may also need to remember that a small river bluff is only useful if you have a hand that cannot possibly win a showdown.

Q: You bet $1 into a $1 pot. How often does your opponent need to fold to make this bluff profitable?
A: Your pot odds here are 1-to-1 so you need your opponent to fold a little more often than he calls (more than 50 percent of the time) to make this bluff profitable. The full size of the pot is about as large as you should usually be betting unless you are getting all-in on an earlier street. There isn’t much point in betting $400 in to a $500 pot on the turn when you only have $600 in front of you.

Q: You bet $50 into a $220 pot on the turn after your opponent checks to you on the flop and the turn. How often does your opponent have to fold to make the bluff profitable?
A: Your pot odds here are 220-to-50 or a little better than 4-to-1 (almost 23 percent) so you need him to fold four times for every time he calls for your bluff to make a profit.

Q: You make a $7 continuation bet into a $10 pot on the flop. How often does your opponent need to fold for your bet to be profitable as a bluff?
A: 7-to-17 or about 40 percent.

Hopefully those answers were all clear and you understand the basic formula. Even if you can’t use the mathematical formula on each hand, it is useful for breaking down hands after the fact and for understanding how bluffing theory works. Using a reasonable estimate, and giving some thought to the process, will increase the profit you make on your bluffs and help you develop an optimal bluffing strategy.

— Chris “Fox” Wallace has made his living at the poker tables for several years and written award-winning strategy articles. He also helps run TourneyTracks.com.