My experience of back-to-back wins 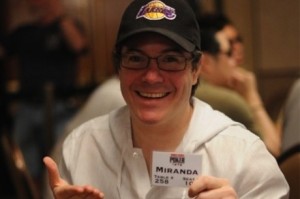 After a disappointing PokerStars Caribbean Adventure, where I cashed in 0 of 8 or so tournaments, I continued my normal January tournament trip to Biloxi, Miss., for Beau Rivage’s Million Dollar Heater tournament series. I always look forward to going to Biloxi because I get to visit my family a bit, as they live in neighboring Pensacola, Fla., and the poker is always amazing. This year proved to be no different.

My first tournament was a $1K event. The fields in Biloxi are usually modest in size, and because of this, many professionals opt to skip the series, which is fine with me. There were 87 people in the field, which is about what I expected.

Nothing went well for me for the first few hours and I found myself short-stacked with around 25 big blinds. Someone raised to 2.5 BBs from middle position and the button and the small blind called. I elected to go all-in when I looked down at the A-8 offsuit in the big blind, which I think is super standard in that spot. To my surprise, all three called. I scooped a nice 100 BB pot when I hit an ace. From there, I ran over the table and found myself at the final table with around a third of the chips in play.

At six-handed play, I won a flip or two, giving me half of the chips, and that’s when a fun hand came up. I raised with 9-9 to two BBs from middle position and the big blind, a regular local player, reraised to four BBs out of his 50 BB stack. I happily called, planning to set mine. When someone reraises small out of position, they almost always have A-A, K-K, Q-Q or occasionally A-K. The flop came 9-3-2. My opponent quickly bet 20 BBs into the 10 BB pot. At this point, I could just call, but I doubt he would even fold A-K, so I went all-in and he snap-called with A-A. I held up and eventually got heads-up with a 6-to-1 advantage against Alex Kuzmin, a tough Russian player.

Right off the bat, I doubled his 28 BB stack to 56 BBs when my K-J couldn’t beat his A-A. The final hand of the tournament was a lot of fun. I raised

to two BBs and he reraised to six BBs. We had developed a fairly aggressive dynamic with a decent amount of three-betting, though there were few four-bets.

So, I elected to make it 14 BBs. He instantly called, which confused me. The flop came

. With 28 BBs in the pot and 40 effective big blinds behind, I chose to go all-in. If I bet around 10 BBs and he pushed, I would be in a tough spot. And if I had checked, it would’ve been to give up the pot.

I figured if I pushed he may fold hands such as 10-10 and he might call off with hands I am ahead of, such as Q-10. I was sad when he snap-called, but happy when he turned over the

The next day I registered for a $2,000 event, which got 49 people. I was super tired throughout this whole event so I don’t remember many hands. When you’re tired, you’re probably better off skipping a tournament, and playing tournaments tired seems to be one of my miniature leaks.

I proposed we chop the tournament evenly and there were no objections. We all walked away with a touch more than second-place money, which was $23,000. I’m not normally a fan of chopping, but when a deal this good comes up, I feel like it is spewing equity to turn it down, especially since I only had 15 BBs.

When you run hot and win a few events in a row, it’s important to not get overconfident and cocky. Anyone can win one or even two tournaments in a row off dumb luck. Remember to stay humble and show up to every event with the intention of playing your “A” game. The players who stand the test of time all realize there’s always something new to learn and if you stop improving, you will quickly be passed by. The true winners realize bragging does little more than make you look like an idiot. I prefer to let my results do the talking for me.