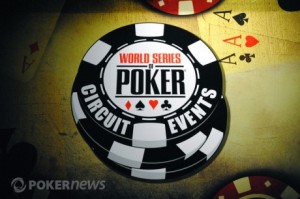 The cover of our January issue proclaimed, “WPT Invades Florida!” and featured the winners of four World Poker Tour events in the Sunshine State during a two-month period.

It was a worthy cover, and validation that after being mired in financial troubles, the World Poker Tour has emerged as every bit the force it was before trouble begot its previous owners. The WPT’s new regional series is an answer to the World Series of Poker’s successful circuit. But managers and players are justified in wondering just how much is too much when it comes to tournament series?

It’s a point that crystallized further for me as I updated Ante Up’s Player of the Year website with the first qualifying events of 2012.
On Jan. 21, players had to choose between Choctaw Resort’s World Series of Poker Circuit Main Event in Oklahoma or Beau Rivage’s Million Dollar Heater Main Event in Mississippi. The events are far enough apart distance-wise that it’s hard to say they’re directly competing, but no doubt they draw from the same pool of players in the middle of the map.

Fortunately, the spreading popularity of multiple Day 1s mitigates the situation a bit with casinos that are mere miles apart, like Calder and Hard Rock are, but all the same, I imagine players (and managers) would prefer signature events not overlap.

Sometimes even back-to-back events can cause concern. Take the WPT’s double-billing in the Tampa Bay area in December. Players didn’t have to choose between playing at the Hard Rock Tampa or Derby Lane because of the schedule. But did they have to choose because spouses and children were expecting something nice under the tree on Dec. 25 and only one in every 10 tournament entrants goes home happy?

Tournaments are status symbols for poker rooms. Rarely are they big moneymakers, at least not directly. But don’t think for a minute any poker room is happy taking a loss or breaking even on a major series. When you consider the time and effort required to plan and pull off a successful event, coupled with the ever-increasing need to guarantee larger prize pools and the hefty fees brands such as the WSOP, WPT and Heartland Poker Tour command, it’s hard to imagine anything else that causes more gray hair on the heads of poker room managers these days.

So what, if anything, can be done about series overload? Or should be done?

Let’s start with the second question.

Animal Planet would be far less entertaining to watch if cheetahs lived in one place and gazelles lived in another. If so, the cheetahs would lose their aggressiveness and gazelles would never improve their elusiveness. There’s something to be said for competition. What doesn’t kill us makes us stronger, and that applies to tournament series as much as it does wildlife.

With a neat, tidy, never-overlapping tournament schedule, there’s less incentive for tournament directors to be creative and deliver on what players want.

It’s a fair point, but here’s the thing: Nature has a way of overcorrecting. It’s not just the weak series that disappear in that winner-take-all environment. Good, but not great, series could disappear as well before they have the chance to make it to that next level. And that leaves players with too few, rather than too many, options. That’s a bigger problem.

So let’s agree that we should be doing something.

COORDINATION BETWEEN ROOMS: We can start with what can’t be done. We can’t add a 13th month to the calendar. Or a 14th. So every time a poker room decides to get into the tournament series game, the calendar looks a little smaller and our problem gets a little bigger. We’ve been told Los Angeles poker rooms try to coordinate their series schedules. A similar movement was rumored to be afoot in South Florida, though it obviously didn’t prevent the Hard Rock-Calder February conflict. Perhaps there’s a role for the Tournament Directors Association or similar organization to play here. A calendar clearinghouse, of sorts, letting rooms lay claim to a block of dates in a specific region so potential conflicts can be headed off before they become conflicts.

BETTER PLANNING FROM BRANDS: Sponsoring organizations can do a better job of policing this as well. The WSOP has little overlap in its nearly yearlong series. Should the WPT look to do the same? I like Skittles, but I know if I eat one, I’m eating the whole bag. And then I’ll be sick. Sometimes too much of a good thing can be bad for you. The Tampa tangle in December is an early warning of what can happen when a brand competes with itself.

COMPRESS SERIES SCHEDULES: We’re starting to see this with some that schedule two events each day. Sure, it may force players to choose between events in an individual series, but I’d guess that players would prefer that to having to choose between two signature events in competing series.

BUY-INS FOR ALL LEVEL OF PLAYERS: Tiers of events can solve some of the problem, too. Not every series needs a $2,500, $3,500 or $10,000 main event. There’s a market (I’d argue a pretty large one) for a series that caps out at $500, with several $100 events leading up to it. That kind of series can complement a richer one in the same market at the same time, as it might attract groups of players to the region since there’s something for everyone.

In the end, it likely will take a little bit of all of this. Let’s hope it works. Hundreds of poker rooms in the United States don’t attempt poker series. We don’t want those who do to stop.

— Scott Long is co-publisher of Ante Up. Email scott@anteupmagazine.com.