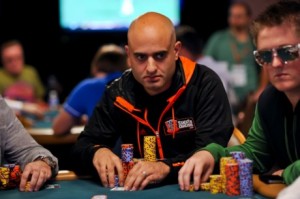 Jared Tendler is a licensed mental health counselor and author of the new book, the Mental Game of Poker. He previously did poker coaching at stoxpoker.com and is a coach at DragTheBar.Com. He’s an accomplished golfer who does mental coaching for golfers as well. Recently he wasa guest on the Ante Up PokerCast, and here’s an excerpt from that conversation.

Tell us about the Mental Game of Poker and what prompted you to write it. I felt there was a need to take the mental game, poker psychology, a step farther. (Alan) Schoonmaker and Tommy Angelo, (Matt) Hilger, guys like that, I think really set the foundation and got more poker players focused on the importance of the mental game. …. What I saw was a need to go deeper into specific issues like tilt. Tilt had been prominently looked at as being anything less than playing your best. But there’s a lot of different kind of mental-game issues, such as fear, anxiety, focus issues, motivation, confidence issues, but yet poker players were seemingly putting it under this one umbrella of tilt. … I’ve worked with over 200 poker players, and when they talk about tilt they’re talking about anger, and some of these secondary issues kinda get pushed to the side because of the anger they have when losing, or during a bad run or what some idiot at the table is doing to piss them off. All these things sort of take such big priority, so my real goal with the book was to try to really systematize and organize the mental game in a very logical, straightforward non-jargoned way. And give people a real tool, a resource they could use on a regular basis.

There probably are some old-school folks who don’t understand this type of training. What’s your advice to them on why they need to think about the mental side of the game? The mental game provides you another avenue to create an advantage where you’re going to make better, more consistent decisions.

I think in the past a lot of people had gotten turned off by the mental game and sports psychology because historically psychology has made things to be about your mom (laughs), about deep-seeded issues, and so you’re lying down talking about some dream you had. It doesn’t have to be that way at all. There’s nothing personal in this book.

This book is about performance, about making quality decisions. And these blips that pop up are predictable. It can be as simple as hating to make mistakes. It can be as simple as really wanting to win, and feeling so much pressure that you end up making a poor decision. So there are a lot of simple reasons for why your decision-making can break down that has nothing to do with how you were raised. (laughs)

What are some of the top mental lapses that you’ve seen in players and how did you research this topic? My research was my work. I’ve been coaching poker players for four years now. My research has been responding to people on forums and talking and interacting with them live and online and really try to understand what people go through. … Focus is a big (mental lapse). Sometimes players get distracted by previous hands, especially one that was perhaps a pretty sick beat. That doesn’t necessarily always have to cause anger; you can just be slightly frustrated or kinda wondering if you could have made that decision better. And the important thing to do in that regard is to leave the evaluation or analysis to after the session. You obviously want to be making adjustments to the changing dynamics of the game, but you don’t want to go too heavily into that thought, because if you do that you’re kind of separating yourself from the game and you’re not going to be focused on the next hand.

What are some easy fixes that players can do today to improve their mental outlook on the game? Tilt and anger are major issues, but I don’t want to give people the notion that there are simple fixes to some of these more complex problems. With a complex problem there are many pieces to the puzzle and that’s what the book is really all about. But a simple tip that has helped many players is realizing that the mind and your thought processes are your mental muscle.
People who are mentally tough and able to deal with difficult circumstances, it’s oftentimes because they’re able to think through it properly. Having your anger get the better of you in certain spots means you’re getting a little bit loose in being controlled and being deliberate about maintaining that control.

The anger you’re feeling is what’s easy, what’s harder is to force yourself to slow down, so that’s gonna take some will and a real concerted effort to do that.

You were a three-time All-American in golf. What similarities are there between the mental aspects of poker and golf? It’s really pretty striking. Golfers have confidence issues. … Both golf and poker, because there’s so much variance, you just can’t set yourself up to expect things to just keep on rolling very easily.

The games are going to bite you in the ass if you do that. Instead you have to stay solid on the process, how you go about making quality golf decisions, poker decisions. And the execution of that is not always in your hands, and that’s a big key. Certainly anxiety in big pressure moments, you get into a big game, big amounts of money, more than you’re used to, it’s oftentimes the equivalent of playing for money on the golf course.
The pressure can be different, but how you handle that pressure and the skills that you require are very similar to both games.

You’re licensed to counsel people on mental health, which sets you apart from others in the marketplace. How important is it for players to seek advice from a licensed counselor over an unlicensed one? A lot of it has to do with education and training. I spent two years getting a masters degree, after majoring in it in college, and then I spent three years getting actually trained, doing one-on-one therapy with kids and families, doing more traditional work. The value of that was the ability to know what is relevant. So many people think about an expert knowing what to do, teaching you what to do, what to focus on, what to think about, but a lot of times it’s getting you to not think about all the stuff that’s irrelevant. I’m a master at being able to identify what’s relevant and what’s not. … Sometimes it’s as simple as not understanding the learning process. … It’s about having a robust ability to dissect problems and solve them.