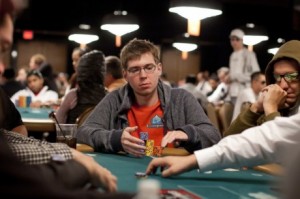 Jim Rice was a contestant on the most recent season of Survivor. While his job was listed as medical marijuana sales, he’s also a recreational poker player with some tournament accomplishments to his name. Ante Up friend David Bloomberg had a chance to chat with Rice to discuss his background and some of the parallels he sees between poker and Survivor.

Do you think being a poker player helps on Survivor? There are a lot of parallels between poker and Survivor in terms of how you’re constantly assessing your situation. And just like a poker tournament, you can play for days and one mistake, one slip costs you the whole thing.

Another parallel between the two: One of my strengths in tournaments is knowing that not everybody is there to win; some are there just to make the money. Same thing with Survivor. That was one of my downfalls in Survivor, assuming everybody was there to win.

How and when did you start playing poker? I started playing when I was 5 years old, on my grandfather’s lap. We played penny poker every Thanksgiving and Christmas. It was definitely a big part of our holiday culture and it still is. That’s probably why I’m willing to gamble on anything, like in the game of Survivor. But just like any poker player, you get offended when they call it gambling. I don’t like calling it that; I was assessing the odds and the best move for me in each step of the game based on what I felt the implied odds were.

What do you feel are your biggest poker accomplishments? Winning more than I’ve lost. I think that’s a big thing to be able to say. There are tournaments I’m very proud I’ve won, which usually go back to a big decision I’ve made. I have a couple of highlights, a World Poker Tour bracelet from a couple of years back, and I finished third in a Heartland Poker Tour tournament this past year.

No matter how bad anything is in my life, whenever I have two cards in my hand, it’s my form of meditation. Even if I don’t win, it takes me away from whatever my stresses are in my everyday life. That’s what poker has always been for me. It’s the only time I don’t have to answer to somebody else. It’s a way that I remember my grandfather and my family and I have a lot of positive memories. I don’t have any negative memories surrounding poker. It stinks to lose, but it’s a pretty special, pretty important piece of my life.

Your “official” job listed on Survivor was medical marijuana sales. How much time do you spend playing poker compared to selling marijuana? Dispensaries are my full-time job. More than anything, I am a serial entrepreneur. Poker I play as often as I can. There’s a tremendous poker community here in Colorado. On a weekly basis, there are $20,000 prize pools. There was actually a million-dollar prize pool Heartland Poker Tournament and I finished 31st.

I was proud but disappointed I didn’t make it further. In April, I was at the TV table and I couldn’t tell anybody I was going to be on Survivor. I was able to give a few clues. I said my plan was to outwit, outplay, and outlast everybody on the table. Nobody picked up on that.

Do you think being a poker player helped you get on the show? I think it did. The people they cast on Survivor, they’re looking for people to tell the story. I tend to put things pretty succinctly. And it’s constant analysis and reanalysis. It’s the same as a poker player, looking at their chip stacks, seeing if they’re weak, if they’ll fold; if I do this, what’s this guy going to do? There really are a lot of parallels.

You didn’t really talk much about being a poker player on Survivor; was that by design (you did lie about your actual job) or just edited out? I just got done watching Annie Duke on Celebrity Apprentice. As sweet as Annie is, nobody trusts a poker player. I wasn’t telling anybody that or I had a marijuana dispensary or I have a masters degree. None of those advanced my game.

How would you compare your performance on Survivor and in poker to that of Jean-Robert Bellande?
He made it further than I did and he made it further in the World Series than I did. His track record is better than mine. The results speak for themselves. I think I have a ways to go before I catch up to his lifetime earnings.

Are you primarily a tournament player or do you spend a lot of time at the cash games as well? Live tournaments are my bread and butter. In a tournament, I realize the weight of every move I make. I get a little more frivolous with money in a cash game. I don’t like grinding; I like going for the big wins. I just haven’t had much luck with cash games. I like having a finish line. There’s more finality in every person’s move, really putting people to their test for their life is something I like to do.

At the merge on Survivor, I was ready to put my life to the test. It was an 86 percent chance I was going to be in great position for the final three and a million bucks and a 14 percent chance of going home. Really a no-brainer. Not everybody was in it to win it, unfortunately.

What would you say your preferred style of play is? I kind of mentioned this in the first couple of episodes. In the beginning of a tournament, it’s slow-chip acquisition. Get a feel for the land, really just survive. You really don’t start making your moves until the stakes are higher. It doesn’t make much sense to play extremely aggressively when blinds are low. Similar to Survivor, you want to survive, get your feet firmly planted, get a good sense of where you’re at in the game.