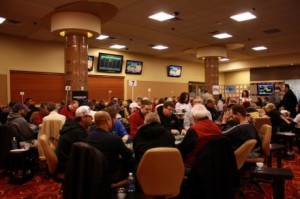 Not only did the 2011 World Series of Poker Europe Main Event kick off on Saturday, but two events concluded. The final four of Event #5 played out, with the final heads-up match playing out with Michael Mizrachi taking on Shawn Buchanan. In Event #6, Philippe Boucher, steamrolled the final table in quick fashion.

Michael "The Grinder" Mizrachi is now a two-time World Series of Poker bracelet winner after outlasting the 125-player field in Event #5, €10,000 Split-Format. "The Grinder" absolutely dominated the heads-up portion of the bracket for the last two days, climbing to the top of the heap to hoist the bracelet and pad his pockets with another €336,008. This latest cash moves him into sixth place on poker’s All-Time Money List, with just shy of $12 million in career earnings.

Mizrachi was in seventh place out of the 16 who advanced to the heads-up bracket, and he really only needed one hand to advance through the first round. On the very first deal of his match with Kent Lundmark, Mizrachi woke up with

. A board full of blanks all but ended that match. Next, he had to face off with Brian Hastings, the online shark who was riding high from his win over Erik Seidel in the previous round. The Mizrachi/Hastings match took more than one hand to decide, but Mizrachi won every meaningful pot on his way to a relatively easy win.

That set the stage for Mizrachi’s battle with France’s Roger Hairabedian in the semifinals, and the two of them sparred for several long hours without much movement. Finally, Mizrachi turned a straight to cooler Hairabedian’s set of fives, and after hours of pecking, he finally cut down his opponent.

Shawn Buchanan was certainly a worthy opponent for the final, an accomplished player in his own right. Both he and Mizrachi had gotten heads-up for bracelets over the summer in Las Vegas, but both fell as runners-up at their respective final tables. Buchanan was looking for his retribution on Saturday, but the deck and the chips were stacked against him as he began the final match at a 2:1 chip disadvantage. Mizrachi powered over Buchanan with his big stack. And a bit of luck never hurts, either. On the last hand, Buchanan called off his short stack with

ended up best on the

For the second consecutive year, Michael Mizrachi posed for photos with a WSOP gold bracelet clutched in his hand.

For the play-by-play of the matches on Saturday, check out the PokerNews Live Reporting Blog.

What a day this has been! It’s the general concession that short-handed play goes at a faster rate, but to finish any bracelet event in less than four hours takes some doing. Philippe Boucher, from Quebec City, tore through his opponents in enough time to allow for 18 hours of rest before he sits down for the Main Event on Sunday. It actually took more than an hour-and-a-half to lose one player and then it became a one-man show.

Every time player were all-in against Boucher, they were shown the door. One-by-one, he busted all his opponents to storm the title. Once he took over the chip lead, he pounded his opponents, and when he needed luck, the lady was on his side.

. Moments later, he was followed out the door by Jarred Solomon who got in a tricky spot and had to call all-in with a marginal hand because the math was right.

The next two to go were Alexander Dovzhenko and Nicolas Fierro. Dovzhenko came back for Day 2 with only 2,800 chips and somehow managed to turn that into a €37,529 payday. Fierro, however, came into Saturday’s play as chip leader, but nothing seemed to go right. We didn’t see too many of his hands because he folded a lot post-flop. When we did see a hand, his last, he had the goods but was counterfeited by the unstoppable Canadian force.

That left Boucher and Michel Dattani heads-up. Soon, Dattani was on the ropes and all-in, and we know how that situation turned out. Dattani was down to just a few chips when he decided to bet pot for 30,000. Boucher put him all-in and he called giving us the final showdown of the day.

The board came down

eliminating Dattani in second place, taking home €76,982. Boucher gets the grand prize of €124,584 and the coveted WSOP gold bracelet.

Check out the PokerNews Live Reporting Blog for all the action from Event #6.