Deception is just part of the poker game 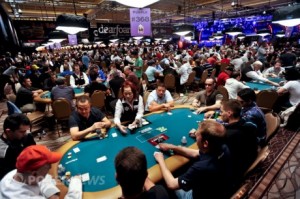 Sun Tzu, author of The Art of War, once said all war is based on deception. What is poker if not a war?

We’ve heard or said, “All poker players lie,” or “never believe a poker player,” many times. At least some form of deception is an integral part to skill sets of accomplished players. It is part of the game.

Reading tells, nonverbal behavior and bluffing are all things written about regularly. But how effective are we at reading deception? Not as good as we might think. Some old studies say the average person can detect a lie about 50 percent of the time. A pure coin flip. But the reverse is that your bluff cannot easily be picked up either. There is some research that says there are a few people with a natural ability to detect deception and that other people can be trained to detect deception.

OK, so where does that leave us as poker players? My advice, which I’ve offered before, is to first work on your presentation before trying to read others; I think it’s a more effective and efficient use of your time. Deception is hard work (identifying deception is even harder) but don’t let me stop you from increasing your proficiency. Just prioritize your time.

Deception in poker comes in many forms: bluffing, table image, table personality, semibluffing, and the like.

Without a baseline of behavior, that is, without knowing the other person’s usual behavior, it’s hard to tell how they’re behaving at the table. For example, a socially nervous person or a naturally shy or introverted person may look like they are lying when they’re not. When someone sits down, even when we never played with him or her, we think we can read his or her behavior. This is a grandiose illusion.

Some research has been done on micro-expressions. Good “lie detectors” can pick up on tiny facial movements that give away lies. The problem is they’re “micro” so they’re difficult to detect; I recently looked at some examples of this and was unable to detect the micro expression. To be able to do this requires extensive training.
Vocal inflection can be vital. There is some evidence that it’s easier to detect lies just from the voice. The eyes are somewhat easier to control; and of course sunglasses, hats, hoodies and hands can hide the eyes. But you have to know the voice has changed and to do that you have to have a baseline.

The book BLINK tells us to rely on intuition. People may be better at detecting lies with their intuition than reason. Implicit or broadly subconscious processes can be more effective than consciously directed thought. Gut reads vs. analytic assessment: take your pick.
Deception is hard work and can place high cognitive demands on an individual, so putting more pressure on a suspected liar can help with detection.

I reviewed an article titled Pitfalls and Opportunities in Nonverbal and Verbal Lie Detection, and it outlined 16 reasons why people have a hard time detecting lies. They clustered them in three major areas: lack of motivation to detect, difficulties associated with lie detection and common errors made by people who try to detect. Again it is a lot of work.

The article suggested, “the most important point to take home is that nonverbal and verbal cues to deception are ordinarily faint and unreliable. This makes lie-detection a difficult task, as there’s no nonverbal or verbal cue that lie detectors can truly rely upon.”

• Ask unexpected questions: Put the person to a mental test and watch the reaction.

• Think on many levels: Does this move make sense? Is this in his range of moves? How much am I risking?

• Recognize patterns: Would the second big stack in the middle stage of a tournament push me (the big stack) all-in on a bluff, or does he want me to think he’s bluffing and he really has the nuts?

• Challenge your assumptions: This is a Cardinal rule for all decision-making; always look for another explanation.

Make a decision and act; regardless of your analysis this is the imperative demand of the situation.

Some patterns to watch for:
When being deceitful a person may take longer to start answering or may answer more quickly, even before a question is asked. But you have to know how they usually respond (their baseline), or if they exhibit an unnatural silence.

People who are being deceitful may show increased discomfort and tension; be more evasive than usual; even become hostile. Some will keep their hands and objects in front of them to form a barrier. A person who is usually interested in each hand may feign disinterest, may lean away from you.

To increase you chances of picking up a bluff or other deception, it’s best to have a baseline of some history of your opponent; then try to assess their typical patterns. Try to see if the story has value or makes sense; then challenge your assumptions. Finally, make your decision and act.

Human communication and behavior is hard to analyze and even more so at the poker table. One way to improve your skills is to use this advice when you’re not in the hand, the same way we try to put people on a range of hands when we are not in the hand; try to see if one or the other players is being deceitful.

Just another way to keep your head in the game.

— Dr. Stephen Bloomfield is a licensed psychologist and avid poker player. His column will give insight on how to achieve peak performance using poker psychology. Email questions for him at editor@anteupmagazine.com.