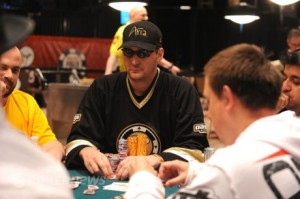 If you gamble on random things, such as blackjack or sports, you’ll find when you lose, you’re on tilt from losing and when you win, you would rather be doing those things than playing poker, both of which are terrible for your concentration.

Every summer, poker players from all over the world flock to Las Vegas for the World Series of Poker. Luckily for the professional players, most of these visitors have little to no chance to actually come away with a big score simply because they set themselves up to fail from the start. To last the seven weeks at the WSOP you must remain focused and ready to play the entire time.

I’ve come up with a few tips that will greatly increase your expectation at a tournament series without even mentioning how to play. It should be noted these are tips for players who want to have the highest expectation possible during a long series and only care about poker.

If you’re coming to Vegas to party and to play a few tournaments on the side, these tips probably aren’t for you. Then again, neither is the life of a poker tournament professional.

Get a lot of sleep

I decided this year that I was going to take around four days off during the seven weeks of the WSOP. To show up at noon every day you simply have to get a lot of sleep. I make a point to get home as soon as the tournament is over each day or around midnight, whichever comes last.

For example, if I play a $1,500 tournament and bust in the first hour, I will play satellites or cash games until midnight and then go home. If I play the same $1,500 tournament and last the entire day, I will go home when play ends, usually around 1 a.m. When I get home, I generally go straight to sleep. I don’t sit around and have dinner and watch a movie. I get sleep so I’m ready to go the next day.

Before this year, I never really played the side games during the WSOP. I now realize just how much money I was missing out on. I’ve played mostly $500 and $1K single-table satellites in my spare time and have been happy with my results.

I also hear the cash games are excellent. I used to simply go home whenever I lost a tournament, which would often waste an entire day. Now, I’m hopefully earning something like $200 an hour.

Assuming you play four hours of side games per day, you will find you profit something like $40K by the end of the series. That’s a nice way to supplement the daily tournaments. It can turn a losing series into a break-even one and a break-even series into a decent winner.

Obviously this will take time away from goofing off or enjoying the outdoor world, but seeing how the profitability of poker has been shot in the foot because of the recent problems with online poker, you simply have to make the most of every tournament series.

Over the past two years, I’ve lost around 40 pounds simply through eating right and exercise. Throughout the year, I always wake up and eat a few eggs, some veggies and some lean meat.

During the WSOP, there are a few food delivery services that will bring healthy food to the table. I have my healthy breakfast plus two meals delivered to my table each day. This allows me to not take dinner breaks, which will make me slightly more profitable, and it allows me to stay in decent shape, especially since I have to cut out a little bit of my normal workout time.

That being said, I still try to get in the gym at least twice per week, even during the WSOP. Also, for those looking to quickly lose fat and keep it off, simply stop eating sugar, fatty foods and starches. This means no smoothies, potatoes, rice, yogurt, fatty meats and bread. If you cut these foods out of your diet, the weight will drop. Realize though, this isn’t a diet, it’s a way of life.

My past vices have been drinking and degenerate gambling. I never really had a problem with either, but I realized they cut into the profitability of poker. If you have a few drinks at night you’ll find you won’t sleep as well and will wake up with a mild hangover, which will make you play worse during the day.

If you gamble on random things, such as blackjack or sports, you’ll find when you lose, you’re on tilt from losing and when you win, you would rather be doing those things than playing poker, both of which are terrible for your concentration. My advice is to cut these activities out of your life, and not just for during the tournament series. If you do, you will find yourself a much happier person in the long run.

There are many more things I could write about, but sadly, I am out of space. Please feel free to email all questions and comments to support@jonathanlittlesecrets. com.