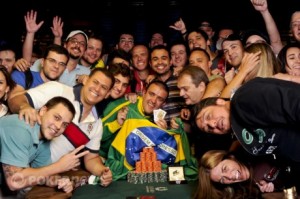 The November Nine of the 2011 World Series of Poker is set. We’re sure you followed all the action in the Live Reporting Blog and the live stream on ESPN, but you probably want to know a little more about these guys.

Badih Bounahra is a 49-year-old businessman from Belize City. Bounahra learned to play poker on TV and according to our Live Reporting Blog, thinks seven-deuce offsuit is the best hand. When play resumes in November, Bounahra will begin in seat two with 19,700,000.

Martin Staszko, a 35-year-old poker pro from the Czech Republic cashed four times in the 2011 WSOP prior to his Main Event run. He will take the chip lead of 40,175,000 into play in November and will be in the nine seat.

Tune in on Friday for Part 2 of this video series and as always, be sure and follow us on Twitter, it’s one of the fastest ways to get up-to-the-minute news.

bestbet Jacksonville to mandate vaccinations for all employees

Why You Should Be Using Bitcoin To Bet On Your Favorite...