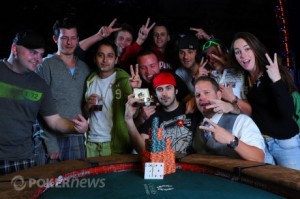 A person may not receive, become the depository of, record, register, or forward, or propose, agree, or pretend to forward, money or any other thing or consideration of value, to be bet, wagered or gambled on the result of a race, contest or contingency.

Though courts in New York at least considered that an increased level of skill in a game that requires skill and chance “could” at some point become a game of skill, Maryland courts do not see it that way.

A criminal case involving a person convicted of operating a pinball machine in 1956 is still good law today in Maryland. The case, Brown v. State, noted that “(T)he insertion of the money and the operation of the device by the player in the hope of winning a monetary reward in varying amounts, in our view of the Maryland Statute, constitutes a bet or wager, regardless of the element of skill.” In addition to this language, which in and of itself is detrimental to the argument that poker is a skill game, the Brown case also cited, Ankers v. Bartlett, which held that “playing any game for money is gaming.” Ankers declined to recognize that skill, no matter how much skill, would have any effect on the analysis of whether the game is gambling.

By stating that the insertion of money and operation of device by a player in hopes of winning monetary reward in varying amounts constitutes bet or wager regardless of element of skill involved in playing game, Maryland has taken an extremely wide view of what encompasses “gambling” and what activities can be prosecuted under anti-gambling statutes in the state.

Though the argument remains as to whether poker is a game of skill or chance, courts are bound, to some extent, by the history of decisions made by courts in prior cases. Until such time as a court in New York or Maryland reviews the earlier opinions, beginning the snowball effect of overturning anti-poker case law, it will be difficult for online poker to regain its foothold on the American gaming landscape.

With the indictments handed down and the state law issues much at the core of the prosecution’s case, players are asking what next? With the findings of a recent learned study, “The Role of Skill Versus Luck in Poker: Evidence from the World Series of Poker,” by Steven Levitt and Thomas Miles, professors at the University of Chicago, heralding poker as a game of skill being published by major newspapers around the country, all eyes may be shifting to South Carolina, whose Supreme Court is looking at the issue of whether Texas Hold’em is a game of skill or chance for the purpose of its criminal gambling statutes. The case of Chimento v. Town of Mount Pleasant is before the Supreme Court of South Carolina and will answer that question.

The Chimento case involves a home poker game where about 20 people were playing Texas Hold’em. On a particular evening local police officers entered the home and arrested all of the players, charging them with a violation of § 16-19-40, which provides:

If any person shall play at any tavern, inn, store for the retailing of spirituous liquors or in any house used as a place of gaming,…at (a) any game with cards… upon being convicted thereof, before any magistrate, shall be imprisoned for a period of not over thirty days or fined not over one hundred dollars, and every person so keeping such tavern, inn, retail store, public place, or house used as a place for gaming or such other house shall, upon being convicted thereof, upon indictment, be imprisoned for a period not exceeding twelve months and forfeit a sum not exceeding two thousand dollars, for each and every offense.
The players were originally convicted and appealed. On appeal, the argument as presented that although they were admittedly playing a game of cards, this game of cards at issue was not played at a “house used as a place of gaming” as required by the statute. The players reasoned that “if Texas Hold’em is a game of skill, and if a game of skill is not ‘gaming’ or ‘gambling,’ then they were not ‘in a house used as a place of gaming,’ and therefore cannot have violated § 16-19-40.”

The appellate court accepted the argument and reversed the convictions. The case was appealed and argued before the South Carolina Supreme Court in October 2010. A ruling has not been released.

With even the feds looking to state law and state courts for how to handle the future of Internet poker, it is time for the players to mobilize at the state level in response. Knowledge of one’s state laws is important if you’re going to continue to play online. The vast majority of jurisdictions have laws like those in New York and Maryland, which means more indictments could be coming.

The phrase “caveat emptor” will be the controlling rule in the wild world of Internet poker. All players must do their due diligence not just on their state law but on the operators who are offering U.S.-facing poker sites. With major operators on the sideline, the fringe Internet poker providers with dubious track records and liquidity issues are attempting to entice players over to their sites. Players must be aware of the potential consequences legal and financial for moving their play to other Internet sites.

Whether Black Friday and Black Monday are death knells to the industry or bumps in the road is not known at this time, it is certain however these indictments are and will continue to be a source of great consternation for online players. One piece of solace, however, is that great live games are being dealt all across the country in legal poker rooms. To those players, I say get politically active to get state and federal law changed to bring sanity back to online poker, and step up your game a bit and see if you can handle the true face-to-face action in poker rooms across the country. Get comfortable in those roles because it is going to be a while before the courts and the feds sort out the future of the Internet game.