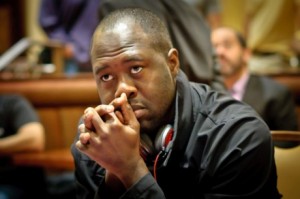 Three players returned on Thursday to the final table of the $10,000 Omaha Hi-Lo Championship. George Lind started with the chip lead with 2.86 million, followed by Viacheslav Zhukov with 2.46 million and Steve Billirakis with 740,000.

Billarakis was quickly eliminated in third place, which left Lind and Viacheslav to battle heads-up. Lind started the heads-up match as chip leader in a battle that lasted around four hours. Both players held the chip lead frequently, but eventually the blinds turned the event into a near flip fest. With the blinds of 130,000/250,000 and the big bet 500,000, Lind lost nearly 2 million chips in a hand that did not even go to showdown.

With just 2.5 big bets left in his stack, Lind was all-in on a flop of

. Viacheslav was actually behind with

. That did not change when the

hit the turn, but now Viacheslav held a wheel draw to go with a Broadway draw. The

fell on the river to give Viacheslav a wheel and the bracelet.

Find out more on how Zhukov took down this title by reading our live reporting pages.

Chen played well at the final table and even held the chip lead for a while. However, Chen was crippled when he ran a flush draw into the nut flush of David Diaz. Diaz eliminated Chen in the next hand, adding a fourth-place finish to Chen’s resume and $100,200 to his bankroll.

Diaz played for the bracelet in this event against Anders Meli. The heads-up match started with Diaz holding a slight 3.3 million to 2.8 million chip lead. Diaz kept the pressure on Meli and took pot after pot until Meli was under 1 million.

gave Diaz the lead, and left Meli needing either a four or running straight cards. The

on the turn gave him his straight draw, but the river

Your "last chance" to find out what happened at this final table is via our live reporting blog.

Day 2 of the $1,500 No-Limit Hold’em Shootout started with 160 players looking to win Round 2 and take another step closer to the final table. Several big names advanced out of Round 2, including Dan Kelly, Erik Cajelais, Frank Kassela, David "The Dragon" Pham, Lars Bonding, and Vitaly Lunkin.

Sixteen players advanced out of the second round and will return on Friday to play to the bracelet. The final day will be played as a two table sit-n-go, with the winner taking the bracelet and $369,371.

Follow along on Friday as the final two tables shoot it out in our live coverage blog.

Nearly half of the overall field returned to play in Day 2 of the $3,000 Limit Hold’em. Most of the day was spent whittling down the field to make the money bubble. John Hoppman had the dubious honor of being the bubble boy. On a flop of

, Hoppman bet and was called by Tyler Bonkowski. He then moved all-in when the turn broughht the

, and was called. Hoppman held pocket tens, but Bonkowski held

and had flopped quads. A brutal way to go out, but the remaining 36 players were glad it wasn’t them.

Eighteen players remained at the end of Day 2 with Shawn Keller the chip leader. Sorel Mizzi, Jeff Shulman, and Victor Ramdin are all still in contention for the bracelet. Play will resume Friday and play to a winner.

There is a limit to what we can share here. For more, check out our blog.

Just 88 players survived Day 1. Ronald Lee will take the chip lead into Day 2 with 122,700 in chip. John Dolan, John Racener, and Alessio Isaia are all in the top 10 in chips. Players will return on Friday to play down to the money in this event and the final table.

We throw more into the pot with our live event coverage blog.

The $10,000 NL 2-7 Lowball Championship is a prime example of the impressive growth that many events have seen this year. Day 1 saw a field of 126 players take the felt, a 25 player jump over last year. Considering that both the game and the buy-in, and the fact that Black Friday was supposed to significantly affect these numbers, the growth in this event is impressive.

While this event was no-limit in format, the day still finished with 88 players in the field. Vince Musso will start Day 2 as chip leader with 106,200 with Shaun Deeb right behind with 104,000. Nick Schulman, Jennifer Harman, David Williams, and Phil Hellmuth all are in the top 10. Play is scheduled to play both to the money and the final table on Friday.

We never lowball you when it comes to coverage. Follow Day 2 of this event here.

On Thursday, the PokerNews Podcast crew talk about Wednesday’s bracelet winners, the $10,000 Omaha Hi-Lo Championship final table, and what it takes to be a live reporter. They were then joined by QuadJacks’ Marco Valerio who is put into the hot seat as the crew turned the interviewer into the interviewee.

It may sound like QuadJacks’ Radio, but it is the PokerNews Podcast. Listen to it here.

Lynn Gilmartin caught up with $1,500 No-Limit Holdem Six-Max bracelet winner Geoffrey Klein and talked with him about his epic comeback win on Wednesday.