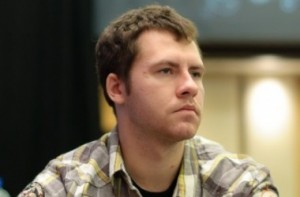 In today’s poker climate, we hear sophisticated online players wearing oversized headphones speaking in tongues quite often. They rattle off terms such as balance and expect the poker world to understand their jargon. Having played the highest stakes online at one point and having played live regularly for the most part of my poker career, I can say quite confidently I adjust and adapt relatively well to either medium.

There is one situation that occurs quite often in live low stakes no-limit hold’em that online players have and will continue to outthink themselves. The situation occurs when a black-and-white-type player takes a black-and-white line. At the lower stakes no-limit hold’em around the country I’ve found that most recreational players tend to discard balance when their range is seemingly polarized. We all have encountered these situations.

You raise preflop with

and get a few callers. The flop comes 7-8-8 with two hearts. One opponent is a middle-aged recreational player drinking beer and talking to friends. You bet a nice solid c-bet. He calls and makes sure to stop talking as everyone else folds. The turn is a third heart. You decide it’s a pretty good card for your hand and fire the second barrel, making better hands such as 4-4 and 5-5 fold and leaving us with plenty of outs (equity), overcards and a flush draw, when called.

He min-raises you. Uh-oh! But wait a second; we’re getting the right odds to call even if he shows us an 8 face-up. We (correctly) call the tiny raise on the turn. The river puts the fourth heart on the board. Ship it! Isn’t poker so easy when you hit?

But wait a second. Have we thought about our opponent’s possible holdings? Didn’t think so. We do have the AH so we’re getting all the money in, right? Wrong! We’re clearly playing our own hand, which means we’re thinking on Level 1, and that isn’t good. Also you can assume all but the most sophisticated low-stakes player will try to turn a one pair hand into a bluff in a spot like this. Since we have the AH we know he can’t have the

He leads into us on the river, a big bet, about the size of the pot if not a little bigger. Here’s a spot where we should seriously deliberate just flat-calling. Since we are both deep (forgot to mention that but roll with me) why would we want to reopen the betting? Say you raise and then he reraises all-in. Since we have the AH we know he’s bluffing or has a full house (most likely 7-7). Forget about him bluffing in this spot. His range in completely unbalanced toward full houses as a player like this is incapable of bluffing in this spot.

That’s the thing about live low-stakes players: They don’t think about balance. When they have the nuts, they simply try to get value. A tiny check-raise on the turn followed by a huge bet on the river. What is he representing? Exactly. A good player may be thinking: “Maybe he has a small flush that decided he can’t win on the river and is trying to get the KH to fold with the pot-sized bet on the river. I call.” Or “Maybe he has 9-10 and decided to represent the flush because he knows we’re good enough to fold overpairs with no heart. I call.”

A word of advice from a successful low-stakes grinder: Give them the benefit of the doubt and pick a better spot. Big calls have been losing propositions in my experience.

I believe in certain situations in tournaments when the blinds are so high you must take any marginal edge that’s available to you. For example getting your small stack in with 5-5 and hoping to win a flip is something you may not want to do in a cash game, but in a tournament it may be the correct play.

It may be 100 percent correct to get all of your chips in the middle in the late stages of a tournament in the situation mentioned above. But in a cash game, with deep stacks I feel you should consider calling and maybe even folding on the river depending on how strong your read is. The blinds don’t go up, patience is key and you will always be able to see dozens if not hundreds of better spots (or millions if you live outside the U.S.) As I write this I’m packing for Toronto. If you live up there and want to trade bad-beat stories over a Molson, be sure to shoot me an email.

— Mike Wolf is a professional poker player who spends his time on the road. Follow him on twitter @mikewolf7, on facebook, or on surebetpoker.net where he plays as a team pro. Email him at MichaelJWolf33@gmail.com.