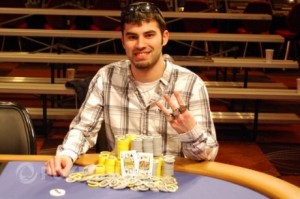 The World Series of Poker Circuit Southern Regional Championship resumed on Tuesday in New Orleans with 44 players remaining from the starting field of 70 to battle it out on Day 2. With five more players entering on Friday, the field reached 75. After seven levels and change were played, only 18 players were left from what was a fast-paced day of poker. Brian Senie ended the day at the top of the counts with 291,000.

He started the day with a modest 46,950 but vaulted up the leaderboard by scoring elimination after elimination. It started by winning a race against short-stacked Will Failla, but the pots just got bigger after that. Senie hit the six-figure mark when John Holley check-raised all-in on a

and faded a club on the river to take the chip lead. Shortly after that, Senie’s

, Brown squeezed to 20,000 and forced a fold from Lawrence Jacobs. Senie, though, reraised all-in with the big stack. Dan Heimiller folded and with roughly 70,000 behind, Brown called all-in. Senie tabled

board to score the elimination and win the crucial pot.

Among those joining Brown on the rail were Joseph Cheong, David “Bakes” Baker, Tommy Vedes, Jon Aguiar, and Heimiller. Still in the hunt is Shannon Shorr, second in chips with 242,500. Not far behind is Steve Brecher (161,800) who final tabled the WSOP-C Western Regional Championship in Rincon, and Matt Waxman (133,600) who won the WSOP-C Harrah’s Atlantic City Main Event.

Who will lock up seats to the WSOP-C National Championship? Our Live Reporting team is on hand to bring you all of the news and developments. In the meantime, you can follow us on Twitter to keep up with the rest of the news from the poker world.