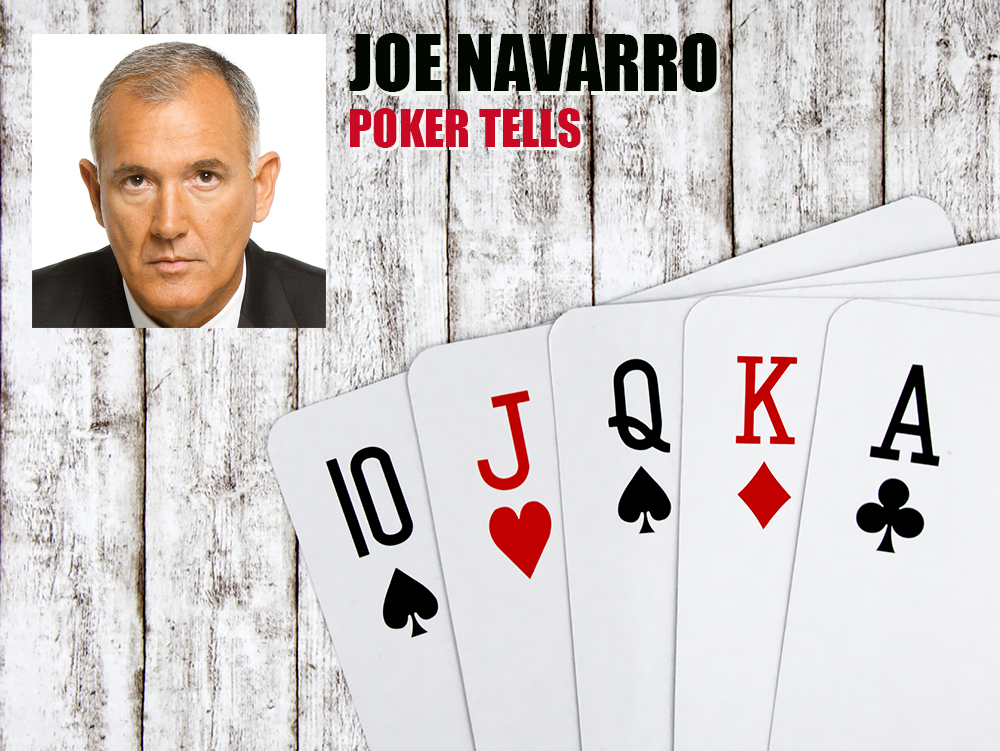 Joe Navarro spent the latter part of his 25 years with the Federal Bureau of Investigation interrogating suspected criminals, spies and terrorists. While working in the departments of Counterintelligence and Counterterrorism, Navarro mastered his ability to read nonverbal body language. In 2003, Navarro retired from the FBI and was approached by Annie Duke and Phil Hellmuth who wanted to learn how to apply his skills at the poker table. For the past decade, Navarro has taught some of the best players in the game how to decipher nonverbal tells, and has written two poker books: Read ‘Em and Reap and 200 Poker Tells.

Navarro was kind enough to sit down with us this week to talk about his experiences and give a little insight regarding nonverbal poker tells.

What was your position with the FBI and how did it lead to you getting into poker?

My job in the FBI, first and foremost, was as an agent. My task was to catch spies as a part of the national security division. Within that program we had a group of six agents that were involved in behavioral assessment, and my specialty was body language and understanding human behavior. I did that for the last thirteen years of my career, and when I retired I continued to teach at the FBI. Annie Duke and Phil Hellmuth found out about me – even though I wasn’t a poker player – and wanted to know what I knew about body language.

What were some of the initial tells you saw at the poker table?

That’s a great question. Aside from the tells that involve either the chips or the cards, what I found out was that the same body language that I had seen in conducting espionage and terrorism interviews, I also saw at the poker table. I saw the same confidence displays when people were being truthful. I saw the same behaviors that I saw from spies when they were hiding something and were reluctant to reveal something. It sort of validated that we have one human brain and it dominates all of our behaviors and that the same behaviors are the same throughout the day.

What advice would you give to a player who has no live poker experience, whether they’re just now turning 21 or they’re an American player who can no longer play on the Internet?

Well first of all, you better hurry up [laughs]. There are a lot of poker players that have spent a lot of time and a lot of money over the years studying body language and poker tells, just to have that competitive edge over their adversaries. The second thing is nobody really knows how important poker tells are, because it depends on the situation, players and the hands. I can tell you, from Duke, Hellmuth, Greg Raymer, Antonio Esfandiari – these are all people that I’ve worked with – that they have made major decisions just based on body language. They were able to recognize that because they had developed that skill, and had they not known what to look for, they would’ve missed out on an opportunity to win the hand.

TJ Cloutier once said, “I thought I had heard and seen it all in my 40 plus years of poker, but when I listened to Joe’s presentation on the behavior patterns of poker players, I actually took notes.” Do you have a favorite “a-ha” moment from a pro, and what have you learned from the game yourself?

When I came to poker in 2005, the number one book about poker tells was Mike Caro’s Book of Poker Tells – which I highly recommend to everybody. However, one of the things I noticed was that there was only about 50 tells there, and, to my surprise, a lot of them had to do with the hands and the face, but not the rest of the body. There was no mention of the neck, fingers, torso, feet etc. That sort of blew my mind, so when we wrote Read ‘Em and Reap, now all of a sudden we went from 50 tells to 140 tells.

I was just surprised that throughout all the years poker had been played, no one had looked at the rest of the body to give them information. So people like Cloutier and Hellmuth – who were in my first class – were really surprised to learn that you could learn so much just from someone’s feet. They’d never heard of that. The other thing I found about poker players is that there’s no end to their willingness to learn. That prompted me to release my second book this year entitled 200 Poker Tells. It’s available on Kindle right now and will be in paperback in about three weeks. Read ‘Em and Reap is now in eleven languages and 200 Poker Tells has sold over 12,000 copies in just three weeks. The beauty of 200 Poker Tells is that it was designed so that players could carry it on their phones and use it while playing.

Grabbing a drink during a hand is a classic move. Is it a sign of strength? Weakness?

That’s a tough question to answer because I have to look at everything. For example, if a player grabs his drink, sits back away from the table and throws his arm over the chair next to him then he is being territorial. Any time a person claims more territory than their entitled to they’re really strong. When we’re weak we claim less territory, so if a player grabbed his drink and shifted towards the table and wasn’t being territorial, then I’d say they’re probably marginal.

Bluffing is obviously important in poker, but people tend to get nervous when they run one. What should people do while bluffing to calm themselves down?

In the classes I used to give, one of the things I would tell them is once you’ve done the math, once you know whether your super strong or super weak you need to stop thinking about that. It’s almost like method acting; pick a person whose behavior you want to look like. Do you want to look like you’re praying or really happy or giddy? Whatever you do, pick a behavior that you can master at producing like an actor and think about the acting of that. Don’t think about the hand. With the professionals I work with it’s effective, because they stop thinking about the cards and they start thinking about looking like Clint Eastwood or some other actor in a certain scene. Your brain can’t focus on more than one action, so focusing on acting really helps.

The use of sunglasses has always been a hot-button issue in the game. Do you think they should be used? Do they even offer an edge?

Well when poker was developed there weren’t sunglasses. Personally, I don’t think they should be used, nor do I think people should be using hoodies and things like that. You might as well be playing with a burqa over your head [laughs] – it changes the game.

That aside, one of the things I found after four years of researching is that when it comes to sunglasses it doesn’t really matter. Hellmuth identified this for me. For instance, poor players realize that they have a really good hand and will arch their eyebrows high – in the same way you’d say ‘hello’ to a good friend. That’s called a gravity defying behavior. Sunglasses don’t hide that. You can see the arching of the eyebrow and you can also see the squinting of the eyes by looking at the muscles that surround the ocular canal. I’ve been doing this a lot longer than most players though, and in terms of the game everyone should be on an equal playing field.

How often do you get a chance to sit on the felt and use your expertise?

About once every three months I get together with some friends out in Tampa, Florida, and play. It’s $5 to play all night [laughs], and that’s about it. For most of my research I actually go to the casinos and I’ll watch four or six tables at a time. That’s how I pick up a lot of stuff. When the game is over, I’ll actually go and talk to the players to see if I was correct. At first players didn’t trust me, but now when I tell them who I am, they’re willing to talk and they find a way to tell me their bad beat stories [laughs].

Be aware that the whole body is constantly transmitting information. We express our emotions; we express how we feel in real time. While there is such a thing as a “poker face,” there’s no such thing as a “poker body.” Somewhere on the body, whether you have a good hand or a bad hand, it will be revealed.