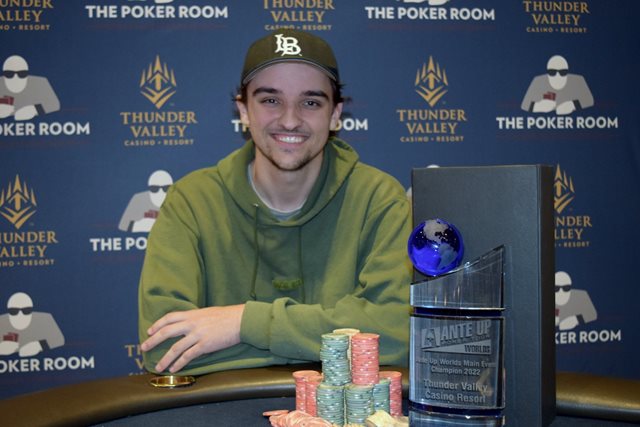 Zachary Smyth was supposed to be in Europe. Instead, he’s the new champion of The Ante Up Worlds Championship event.

“I just quit my job last month because I didn’t want to relocate. I was planning on going to Europe last week, but flight stuff happened, so I ended up winning this,” Smyth, a 24-year-old graduate of Long Beach State University, said of the $1,650 buy-in event at Thunder Valley Casino Resort in Lincoln, Calif., that drew 502 entries over two flights to shatter the $500,000 guarantee with a prize pool of $730,410.

In one of the quickest final tables in Ante Up Poker Tour history, the final eight players went on dinner break and quickly agreed to an ICM deal upon returning, giving chipleader Smyth the title, a trophy and $68,149.

“Everyone saw the chop numbers when on break and probably thought about how shallow we all were playing – about 200 big blinds total,” Smyth said. “I didn’t realize I was in the lead.”

Day 2 went to plan for Smyth, who bagged the most chips in the Day 1B flight with 957,000. It didn’t take him long to find himself seated next to a player who had run his stack up to about 1.6 million.

“I just went on a heater against him; like every hand I had the nuts.” Smyth of Yuma City said. “That got me to 1.8 mil, and from there, it was pretty much smooth sailing. I was just stealing blinds. I didn’t want to play any big flips because of ICM considerations. I just played tight.”

Smyth started playing poker for pennies as a kid with his grandpa, but didn’t start getting serious about the game until 2019 when he watched friends play online and honed his skills by watching YouTube videos. He took a break during the COVID pandemic, but roared back in December of last year when he finished fourth in the WPT Deepstacks Championship event at Thunder Valley for his biggest score yet, $80,035. Two weeks later, he was the runner-up for a Circuit ring, also at Thunder Valley.

“I love it here,” Smyth said. “It’s my favorite poker room to play in. It’s awesome.”

“I like the thrill of the tournaments,” he said. “People can rebuy in cash games. This is for all the marbles.”

Smyth said that, like a lot of kids, he transitioned from video games into poker.

“People talk about live reads – I don’t really go for that. It’s mostly just being good at math,” he said. “I played high-limit video games when I was younger and a lot of people who were good at that stuff professionally transitioned to poker – simple things like pre-flop charts and ICM considerations. You just have to put it all together and I’m OK at it.”

What’s next for Smyth? You guessed it.

“I’m going to go to Europe and play some events out there,” he said. “And screw around a bit.” 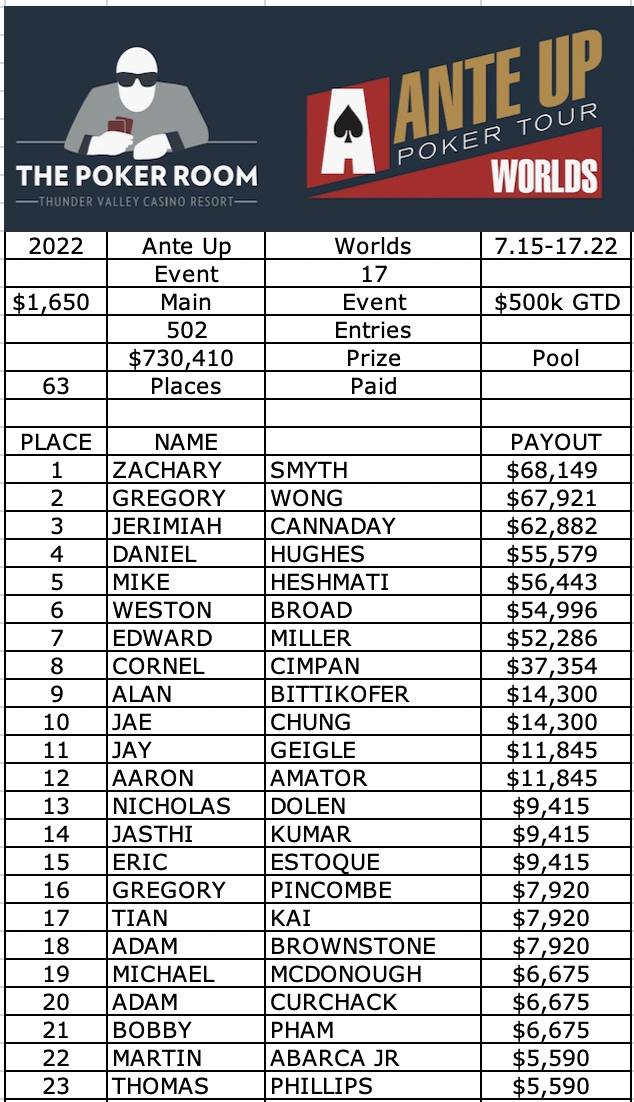