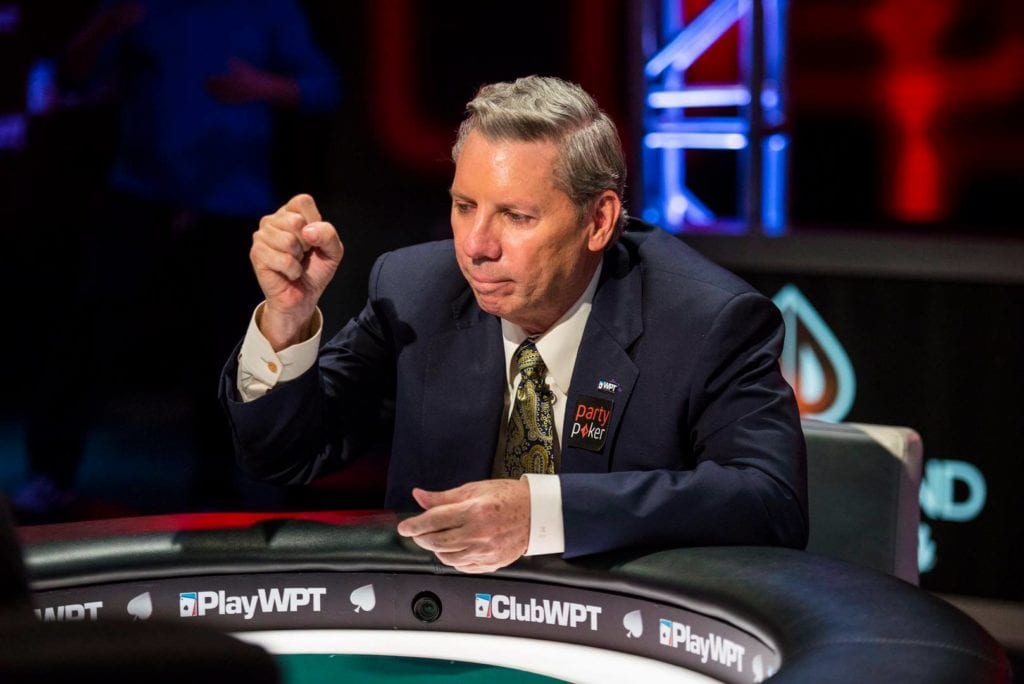 Beloved poker commentator and champion Mike Sexton has passed away. Affectionately nicknamed the “Ambassador of Poker” for his constant promotion and advancement of the game, Sexton passed away at age 72 after a long battle with prostate cancer.

Mike Sexton’s poker career spanned more than 40 years during which he amassed more than $7 million in lifetime tournament earnings. Some of the titles under his name include the WSOP bracelet in 1989, the WSOP Tournament of Champions in 2006, which bagged him the $1 million prize, and a well-deserved WPT title in 2016. Additionally, he also helped co-found one of the most well-known and successful poker brands, PartyPoker.

Sexton was heavily involved in many aspects of poker including broadcasting, business and the game itself. The world of modern poker would not be what it is today without Mike Sexton’s huge contribution. He was a longstanding commentator for World Poker Tour, which hosted televised tournaments internationally, alongside broadcasting partner Vince Van Patten. He spent 15 seasons as a commentator and spent a huge portion of his life advancing the game all over the world.

Since his debut back in the 80s, he’s been on an upward trajectory and he was so well-liked that his competitors hardly winced when this happened. Truly, his death will be a big blow to the entire poker industry. After close to 15 years as a commentator for World Poker Tour, he finally bagged his own World Poker Tour title in 2016.

The Poker Hall of Fame honored Sexton in 2008 by naming him as its 39th inductee for his amazing accomplishments on the game as well as his role in raising the profile of the game for years. In 2017, he received the World Poker Tour Honors, which is the highest distinction awarded to the most accomplished members of the poker community

Saxton also wrote two books and founded a nonprofit that allowed players to donate to veteran causes. He was also a Little League coach and he was known to even skip poker tournaments if they interfered with his coaching schedule. His infectious presence resonated with players and fans of poker, who will miss seeing him regularly on screen as well as on the table.

It is because of his contribution that modern poker has grown by leaps and bounds. As an avid online poker player, his effect on the industry will be felt for decades to come. As the founder of Party Poker, which has grown to become the world’s #1 poker site, he single-handedly contributed to the early days of the online poker boom. Eventually, Party Poker grew to become the first online poker company to go public.

Michael Richard Sexton was born on Sept. 22, 1947, in Shelbyville, Indiana. His parents, both ballroom dance teachers, owned and operated a dance studio. As such, Sexton’s entire family spent a great deal of time dancing together. Sexton and his brothers were proficient ballroom dancers, which is what allowed them to seamlessly transition into gymnastics.

Aside from ballroom dance, Sexton’s other low-key passion was gambling. Sexton learned how to gamble from a childhood friend Danny Robison. He alongside other kids in the neighborhood would gamble on everything they could from wiffleball to Texas Holdem.

Their prowess at gymnastics earned both brothers a well-deserved scholarship to Ohio State University. Mike earned a public relations degree, but as you can imagine, most of his university experience was spent playing bridge and poker in the dorm rooms.

After his student career at Ohio State University came to a close in 1970, he conscripted in the U.S. Army as a paratrooper assigned to the 82nd Airborne Division. The 82nd Airborne had just concluded its final tour of Vietnam, so he never saw combat.

After the Army, he worked as a salesman while continuing to play poker. However, as his poker skills continue to improve he soon started supplementing his salesman income with winnings from his various poker tournaments and home games. Soon enough, his poker escapades were making bringing in more money than his day job.

It was at this point that he decided to take his passion for poker to the next level. Along with his childhood friend Danny and another friend, David “Chip” Reese, they began making rounds in the Vegas poker circuit. It wasn’t until 1984 that he took part in his first World Series of Poker in 1984.

He moved permanently to Vegas in 1985 and four years later, he would go on to win his only WSOP bracelet after coming in first the 174-player $1,500 Seven Card Stud Split tournament. Sexton is credited with coming up with the Super Bowl of Poker, the only other high buy-in tournament, aside from the WSOP.

After marrying his 3rd wife Karen in 2007, the pair welcomed their first child, Ty Michael Sexton, in 2008. One year later, he received his career’s greatest highlight when he was inducted into the Poker Hall of Fame. His name and legacy will be preserved for all time along with other poker players that he once immortalized including Doyle Brunson, Johnny Moss, Chip Reese, Puggy Pearson and Stu Unger.

The world poker tour renamed the WPT Champions Cup the Mike Sexton WPT Champion Cup in July 2020. Sexton had this to say about the recognition: “To have the WPT Champions Cup named in my honor and be part of the experience for all WPT champions moving forward is truly the highest peak in my 40 years in poker. Thank you to the World Poker Tour for this humbling distinction.”

Mike Sexton’s legacy will last for years to come and his contribution to the industry will be forever part of poker history. We join the entire poker world and industry in sending our heartfelt condolences to his wife and son. Until we meet again, may all of your cards be live, and may all of your pots be monsters.