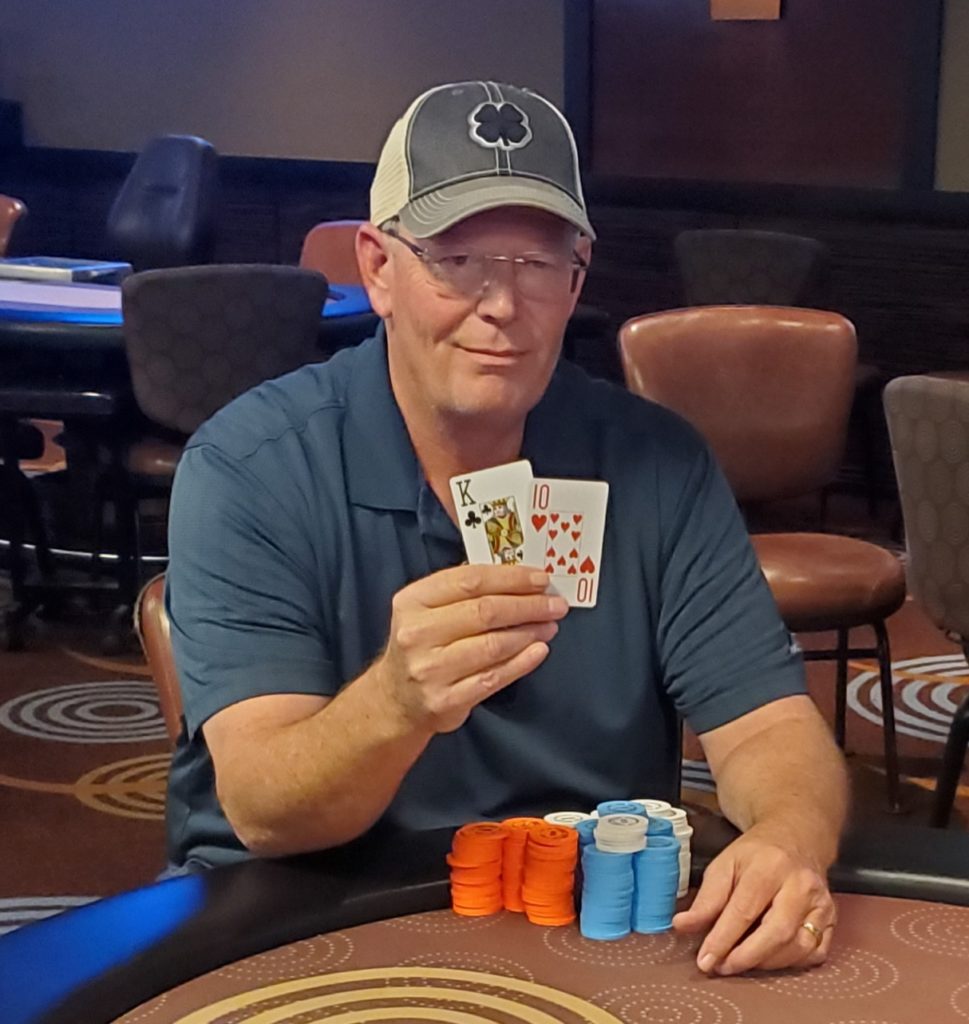 It’s the key to many a poker players’ success, and it certainly was for Ken Sumner, champion of the inaugural Ante Up Winter Poker Classic at Gila River Hotels & Casinos Wild Horse Pass in Chandler, Ariz.

“I was carrying 10 big blinds through the last five hours until the final table,” Sumner said. “I think I did a pretty good job at picking my spots. It was 100 percent patience.

“You have to realize that the result is to get farther in the tournament. You are going to have a time where you need to get a hand or a spot. I was fortunate that I still had enough fold equity to get people to fold, so I was pushing some lesser hands. And when you are doing that with those poor hands, you will eventually wake up with kings or a good hand.”

And Sumner got that break soon after the final table agreed to a deal that paid each $10,000, slightly less than fourth-place money, and to play it out for the rest of the prize pool, the Ante Up cover and an Ante Up World Championship prize package. The final four players reached a second deal, splitting up the remaining prize money so each earned $12,886 while playing it out for the title.

“I was quiet (during the first chop discussion), because I was the short stack. Some of the players, even the bigger stacks, said, ‘you never know what was going to happen.’ And I was ‘that’s great,’ “ Sumner said. “After that, a lot of the players weren’t playing sound strategy like they would have been if all the money was at risk. They were way too loose and I wasn’t. It all comes back to patience.”

Sumner found himself all-in with ace-queen against two larger stacks that were holding pocket pairs, and spiked the queen he needed to triple up. From that point on, he said he was ahead of every hand he was up against the rest of the tournament.

The fact that Sumner was even around long enough to be short-stacked for five hours involved a level of patience. He busted on Day 1A, and on the fifth hand of Day 1B, he flopped trip 10s, only to be outkicked and eliminated. So he had to buy in for a third time.

“There are not a lot of good structured tournaments in this town, so I decided this was my best  chance to play a good tournament, so I fired a third bullet,” he said. “The structure of these tournaments was far superior to what we normally have here, so it should drive more players to play them.”

Sumner of Litchfield Park, Ariz., says he plays mostly online, but returned to live tournament poker when the Ante Up Poker Tour came to Wild Horse Pass’ sister property, Gila River Hotels & Casinos Vee Quiva, in March. He took 15th in the Arizona State Poker Championship in August for $15,000. Riding that rush, his wife, Kristi, made him a deal going in to the Wild Horse Pass event.

“My wife told me that if I took first, second or third that I had to take her to Hawaii. But at that time, there was no chop, so we’ll have to see what that means,” Sumner said with a laugh. “But I probably made about third-place money, so I think she’s going to hold me to it.”

The $400 Main Event featured two starting flights and a $100,000 guaranteed prize pool, that was easily surpassed by more than $66,000 as the tournament attracted 475 entries. Geoff Fisk of PokerNews.com provided live updates of the Main Event.

The series kicked off on Veterans Day with a $35 buy-in Thank You For Your Service tournament that attracted 288 entries. Players with a government-issued military ID received a reduced $15 buy-in, and nearly half the field were military members. Wild Horse Pass added $2,500 to the prize pool and gave all players T-shirts. James Doss of Chicago was declared the winner after an eight-way deal that earned him $1,500, with the rest of the players getting $661 or $660.

“It was incredible. We heard nothing but good things,” poker room manager Susan Pendarvis said of that event. “People were so appreciative that we paid respect to our veterans.”

While Wild Horse Pass has done multi-day tournaments in the past, including a three-day women’s event, the Ante Up Winter Poker Classic was its first series.

“It went extremely well. We were excited by the turnout,” Pendarvis said. “We had done some trial runs with some $400 buy-in tournaments to help break us in to it so we had experience bagging and could be proficient when it came to the tournament.

“There were numerous first-timers here, including people in the state who have not been here before,” she added. “They liked the structure, they liked the buy-in amounts. We are very proud of this property. This is just as pretty as any Vegas poker room.”

Pendarvis also was quick to praise her staff, including Lori Kinnibergh and Jeff Edwards, who helped her build and run the series.

“Thank you to our entire staff here. They were incredible,” she said. “It was great team work. We had very few floor calls. It was perfect.”

Wild Horse Pass features a variety of delicious dining and entertainment options, including Shula’s Steakhouse, Ling and Louie’s and Fullhouse Café. Dance the night away to Live DJs on Friday and Saturday night or enjoy a drink at Spotlight Lounge. The premier entertainment destination features more than 1,000 slot machines, live table games and live entertainment in the Showroom. It also neighbors 36 holes of golf at Troon Golf at Whirlwind Golf Club, a variety of rejuvenating treatments at Aji Spa, horseback riding at Koli Equestrian Center, Bondurant Driving School and shopping at Phoenix Premium Outlets.

Gila River Hotels and Casinos operates three Arizona casinos owned by the Gila River Indian Community: Wild Horse Pass, Lone Butte and Vee Quiva. All three offer a combination of slots, table games, bingo, poker and more, and are open 24 hours a day, 365 days a year. Additional information on these and other events is available at 800-946-4452 or at PlayAtGila.com.

Wild Horse Pass has several tournaments lined up in the coming months. On Dec. 14, there will be a Santa’s Helper tournament with a buy-in of $40 and an unwrapped toy, with players getting additional chips for donating additional toys. A three-day women’s tournament is planned for Feb. 21-23, with a tag-team event planned for March tag-team tournament and another $400 buy-in tournament planned for April. Pendarvis also said to stay tuned to an announcement of “something big” around the new year.

“Thank you to everyone who came out and supported us,” Pendarvis said. “We believe we have some of the best products in the area. We may not be the biggest room, but we believe we are the best.”

EVENT #1 – Thank You For Your Service No-Limit Hold’em