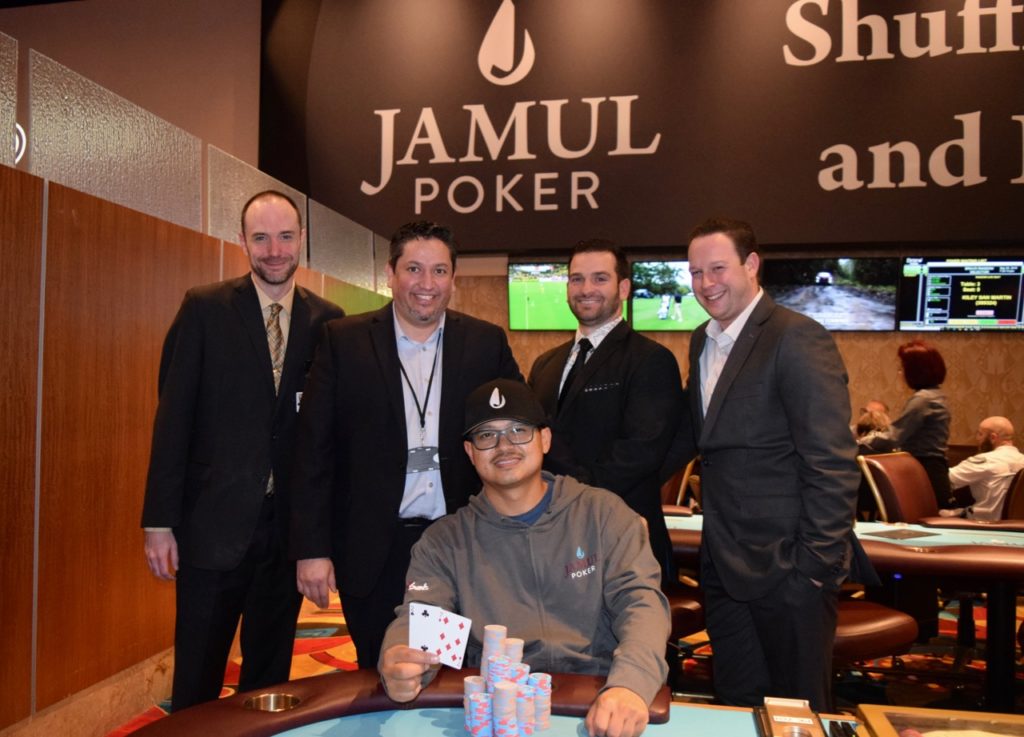 The Ante Up Sweetwater Series was a series of firsts:

“I feel good. This is my first big win,” said Hing, a former poker dealer from San Diego. “I’ve been playing a lot of tournaments and doing well, but not winning. So this was my first first place. I’m still humbled by it … until I see the magazine.”

Hing worked his way to the top spot through two deals, and he was ready to deal even sooner but couldn’t get the final table to bite on negotiating.

“I was just trying to end it so we can go home,” he said with a laugh.

When play got to four handed, Hing finally got his opponents to agree to a deal, with him taking home the most money – $17,000 – and the four playing it out for the title, the cover of Ante Up, a seat in the 2020 Ante Up World Championship and a little extra cash. Hing stood firm on his desire to make more than everyone else.

“I was chipleader and I knew they were feeling the momentum I was getting,” he said. “I was picking up hands. I actually gave them a pretty good deal.”

With the worry of money removed, the final four were whittled down to just Hing and Christopher Smith, who traded chips back and forth heads-up for a bit before the two reached another deal – giving Hing the title, the cover and the extra cash, with Smith booking his ticket to Thunder Valley Casino Resort next summer for the Ante Up Worlds.

“(The magazine cover) is the real deal. I wanted the title,” Hing said. “I wanted to prove something to myself. I’ve been working hard at this and it’s finally paying off for me.”

Hing, who prefers tournaments to cash games, satellited into the $550 event that drew 171 entries, making for a long first day.

“I played the satellite on Friday at 10 a.m. and then played the 4 p.m. (flight) and went right through midnight,” he said.

Hing was down to 60,000 at one point on Day 2, but picked up his biggest hand with about four tables left when he held pocket aces and his opponent shoved into him with ace-king.

Now he’s looking for his next big score.

“I go wherever the big event is,” he said. “I’m looking for that big pay day.”

The eight-event series kicked off with a multi-flight $300 event, and featured a variety of different formats, including an 8-max, a deepstack, two bounty events, a limit Omaha/8 event and a finale that awarded chipleaders extra prizes throughout the event. Hold’em Radio and Poker News were on hand doing live reporting, and John Quattrocchi Jr. from Thunder Valley Casino Resort serving as tournament director of the Main Event.

“To partner with the Ante Up Poker Tour and hold our first tournament series, I thought it went extremely well,” said John Rochfort, Jamul Casino’s poker room manager. “The Ante Up Sweetwater Series attracted many players who had never visited Jamul Casino previously. It was our goal to hold a quality event that would appeal to a wide variety of poker players in the San Diego region.”

Ronald Segni won the Player of the Series competition. Segni needed a third-place finish or better in the final event, and hold off Tavish Margers as well, and went on to win the final event for the title, which includes a $550 Sweetwater Showdown Tournament entry.

Margers finished second for a $250 Prime Cut dining voucher, and Christopher Smith won a tiebreaker over David Para for third place by virtue of most money won and earned $100 in Jamul tournament vouchers.

Players who visited Jamul Casino for the first time for the series got a first-hand look at the aggressive promotions Rochfort and his staff offer. On Saturdays and Sundays, every half hour a player is chosen gets to pick a mystery chip from a bag worth up to $500 and has the option of flipping it to go double or nothing. On Tuesdays and Fridays, every half hour a player is chosen to spin a wheel to win up to $1,000. During the Omaha event, the $1,000 hit three times in one night. On Mondays and Thursdays, a drawing is held every hour with a top prize of a 65-inch TV or $500, and on Wednesdays, drawings are held every half hour for up to $500, with a quarterly prizes that include motorcycles and personal watercraft.

“When developing these promotions, I like to offer ones that are fun and engaging for our players,” Rochfort said. “There is nothing more exciting than when the entire poker room erupts in cheers for a player who has just won a $1,000 cash prize, a 65-inch big screen TV or a Ducati motorcycle.”

Jamul Casino, owned by the Jamul Indian Village of California, is just 20 minutes from downtown San Diego and features seven restaurants, more than 1,700 slot machines, 40 tables games and a 10-table poker room with full bar service and tableside dining, and incredible views of the nearby countryside.

“The series was received tremendously well by those who attended and we hope to continue to expand as we head into next year,” Rochfort said.