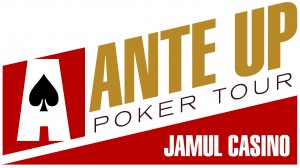 Jamul Casino near San Diego will be the first Southern California casino to host an Ante Up Poker Tour series Sept. 20-29.

Details of the series will be announced when finalized, but Jamul Casino opened its new poker room in grand style in February with a star-studded affair that featured a $550 Golden Cap bounty tournament featuring bounties on poker stars Tiffany Michelle, Erick Lindgren, Norman Chad and more.

“Jamul Casino is thrilled to be the first San Diego poker room to partner with the Ante Up Poker Tour,” said John Rochfort, poker room manager.

Jamul Casino, owned by the Jamul Indian Village of California, is just 20 minutes from San Diego and features seven restaurants, more than 1,700 slot machines, 40 tables games and a 10-table poker room with full bar service and tableside dining, and incredible views of the nearby countryside.

“Anyone who was on hand for the grand-opening spectacle knows that Jamul Casino knows how to throw a party, and we’re looking forward to introducing the Ante Up Poker Tour to Southern California in that amazing environment,” Ante Up Publisher Scott Long said. “I’ve known John Rochfort for a long time, and players who travel to Jamul for this event will be treated to a first-class event.”

Ante Up Worlds and Ante Up Poker Auction