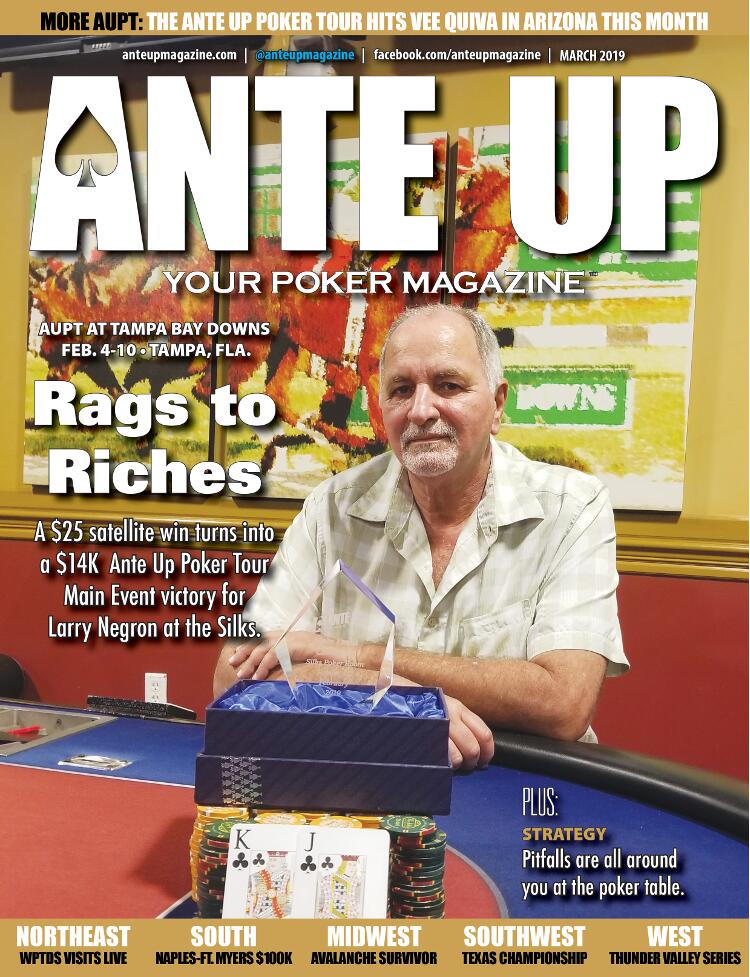 It’s not quite a Chris Moneymaker story, but Larry Negron sure knows how to make money much like the poker legend did.

Negron entered a $25 satellite at Silks Poker Room at Tampa Bay Downs and rode it all the way to a $14,070 payday as the champion of the Ante Up Poker Tour Main Event at the Tampa poker room.

And while this was the biggest score of his poker career, it’s not the first time he’s turned pennies into pounds.

In one more loose thread to Moneymaker’s Cinderella story, Negron, a 60-year-old retiree, didn’t take up poker until 10 years ago.

“I got interested in poker by watching it on TV,” he said. “I wanted to learn, so my son sat me down at the kitchen table and taught me how to play. He was making money at it but it was too much stress so he quit. I played on Full Tilt and did pretty well there until they shut it down. I used to love those $12 tournaments.”

Now, he’s an Ante Up Poker Tour champion after the final three players agreed to an ICM deal in the wee hours of the morning after two previous chop discussions fizzled.

When play was six-handed, it was short-stack Troy Bercot who nixed an ICM deal, saying he’d only accept an even chop. After Bercot was eliminated, the remaining five immediately talked deal again. Four of the five were on board with an ICM deal with short stack Donald “Doc” Brown willing to give the other four $400 each out of his share for the seat in the Ante Up World Championship that goes to the winner. Four agreed, but chipleader Landon Brown was the lone holdout, wanting a larger share.

Play continued with two more players, including Brown, being shown the rail and after a lengthy three-way battle, Brown decided he was ready to make a deal, pitching the others an ICM chop with $500 to each of them from his share for the World Championship seat. It was a deal that cost Brown about $2,000 and the title had he accepted the first deal, though he is California-bound now for a chance at bigger riches in the $500,000 guaranteed event at Thunder Valley Casino Resort in July.

“I was willing to chop it the first time,” he said with a smile, earning $3,500 more in the second deal.

Negron said he would have been happy to buy straight into the $250 buy-in event that attracted 443 entries over five flights, but played a $25 step satellite first, advancing to the $85 Step 2 satellite and onto the Main Event.

“It cost me a total of $65 to get in, so it was very good investment,” Negron said, accounting for add-ons. “I wanted to play this one. For the price, it had a $60,000 guaranteed prize pool. Not too many better tournaments than that around.”

Early on in his starting flight, Negron, who now regularly plays cash games and tournament at Tampa Bay Downs, was finding his way.

“I was up and down for a while. It seemed as every time I gained some chips I lost some. But eventually, a King-Jack got me a flush and doubled me up and then I got quad 4s and got paid off on that, too,” said Negron, who chose King-Jack for his victory photo. “That’s what really changed everything.”

He entered Day 2 17th in chips with 195,000, and said his strategy was simply to play well and not make any mistakes.

“For a while there, any hand I got I was hitting. And I was catching cards,” he said.

It was a strategy, and fortuitous luck, that worked well for Negron. When the final table started, he had more than 3 million in chips, more than double the second biggest stack held by Bill Melms, who was the third player involved in the tournament-ending deal.

“I wanted to play a little tight, but if I had the had a hand, to push it and use the chips to my advantage,” Negron said of his final table strategy.

The Feb. 4-10 series was the first Ante Up Poker Tour series in Florida in more than four years and was just 10 minutes from Ante Up headquarters. It started with a guarantee-crushing 176 entries in Event #1 and featured four other events, including seniors and bounty events.

The Ante Up Poker Tour next moves to Gila River Hotels & Casinos – Vee Quiva near Phoenix for the Ante Up Spring Poker Classic, a 10-event series that ends with a $360 buy-in multi-flight Main Event with a $75,000 guarantee.