Poker ICO: poker rooms with their own cryptocurrencies 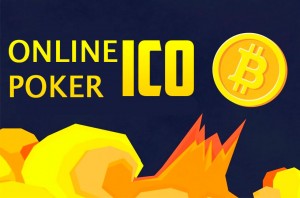 Block chain has finally hit poker. Poker rooms with their own cryptocurrency look very promising to revolutionize the iGaming industry. Poker ICO resolves many problems, such as anonymity, immediacy, honesty and security, and guarantee glittering future to the whole poker world. What is a poker ICO; what is the difference between traditional online poker rooms and bitcoin poker rooms and why is the whole poker world so interested in this topic? Let’s find out.

What is a poker ICO?
ICO stands for “Initial coin offering”. These are high-risk investment in projects that are not completely ready. Basically, this equals to capital raising. You buy cryptocurrency, which is planned to be used as a part of a certain project (for example, poker chips).

What is the gist of poker ICOs?
Initially, poker ICOs are web sites for the game; poker rooms based on “block chain” technology.

Cryptocurrency is not actually a currency in the conventional sense. Bitcoin, Ethereum, Litecoin or any other cryptocurrency cannot be compared to dollar, euro or ruble. This is a unique accounting data system with its own peculiarities.

What is the connection between block chain/cryptocurrency and poker?
The usage of cryptocurrencies in poker gives a solution to a number of crucial problems:
1. Imagine the situation: you’ve made a deposit, played at some poker room, won money, placed a withdrawal request and here is where a real song and dance begins: could you send us identity verifying documents (we promise to check them within 14 days); make sure to play back the bonus; give us proof that it was you, who won and etc. Know the feeling? However, if using block chain technology, none of these problems will emerge. So, what we’ll get are anonymous deposits and document free cashouts.

Block chain is considered to be a decentralized system. That means players are not bound to send their money to the gambling facility. All the information, including payment details, is distributed among players. Poker room team, manager or third parties in general, which have access to poker room accounts, are not allowed to use your money. There would have been no notorious “Black Friday” if all poker rooms had supported block chain technology.
Pros of transactions in cryptocurrency:
• Immediate transactions;
• Anonymous operations; block chain system doesn’t require any bank or payment systems.

2. Rigged RNG (random number generator). Random number generators are also decentralized. This means, that no programmer can rig RNG based on block chain technology. Since there’re no servers, there can be no access to the program code. There’s no chance for third parties to interfere. No superusers can influence the game.

What is the difference between different Bitcoin poker rooms?
There are many Bitcoin casinos, but very few Bitcoin poker sites. The most popular at the moment – PokerKing, RedStar, TonyBet, Betonline, TigerGaming –
have started accepting Bitcoin. But what is the difference between these poker rooms and other facilities with their own cryptocurrency?

Those poker rooms mentioned above accept Bitcoin and other cryptocurrency by analogy with dollar, euro and any other traditional currency. Here’s how it works: you make a Bitcoin deposit, next it’s converted at the exchange rate into the poker room currency and credited to your account. All the withdrawals are made similarly.

Poker ICOs have a completely different approach. There will be no deposit button. Your gaming account will be directly attached to your e-purse. Thus, all your money will be kept on your personal virtual account, but not in the poker room.

The game will proceed in cryptocurrency without any exchanges and all the information about hands will be later recorded on your account.

Poker ICOs
Virtue Poker
Virtue Poker is a project launched by ConsenSys Co, founded by Joe Lubin – co-founder of Ethereum. ConseSys involves around 400 employees in 19 countries of the world.

The idea to create a block chain poker room was born in 2015 already, but it was only realized in 2017. Virtue Poker guarantees instant money withdrawals, guarantees for different tourneys, security and protection from break-ins. Virtual Poker is guided by a team of professionals: Daniel Colman, Brian Rast and Phil Ivey.

Stage of ICO: Virtual Poker coins have not been released yet. The software is under development.

CoinPoker
Instant anonymous transactions, game safety and RNG transparency – this is what CoinPoker poker room can offer to its clients. The team standing behind the facility consists of true professionals: former Team PokerStars Pro member Isabelle Mercier and her partner, Tony G.

Stage of ICO: CoinPoker is considered to be the most successful ICO poker room. Coin Poker is assumed to be one of Stars Group side projects.
It took CoinPoker team six days to attract €5 million in investment in the early stages of the project. Undoubtfully, this is a great result! It has been decided that 15 percent of the money raised will be spent on guarantees for the first tourneys and bonuses.

CoinPoker is only tested for play money. The official launch of the poker room is fixed on January/February 2018.

Cash Poker Pro
The main point of Cash Poker Pro is integration of the poker client in messengers. Beta-version is available in Telegram and the casino developers have decided on cross-platform UI. The client offers several poker types along with cash games and tourneys. The project team is known to develop software for electronic poker tables.

ICO stage: The advance sale stage was estimated at $400,000. Because of the difficulties caused by ICO marketing peculiarities, the product launch is still uncertain. However, by the end of the year the company is planning to be listed on the stock exchange with the ready product.

Bitpoker
50,000,000 players online, 300,000 are playing right now, more than $1,000,000,000 in the i-Gambling industry – these is the statistics about the poker industry on the official Bitpoker web site. Next you can see all the block chain advantages: fast game, immediate transactions, privacy, fair game. Bitpoker is controlled by two people only: Dmitrii “bizi” Motorov – professional poker player – and Lucas Cullen.
Stage of ICO: in September 2017, Bitpoker.io published a message on its Facebook page saying that ICO had been frozen and the team concentrated on the software development. The product is planned to be released in three to six weeks.

Conclusion
Its early days yet to register in poker rooms with their own currency. But on the other side, players have some time to prepare for the block chain of the future, which is right around the corner.