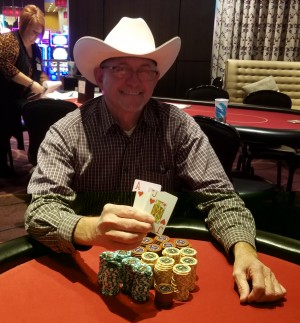 If it wasn’t for the cowboy hat on his head, you might not have even noticed Terry Simpson for almost all of the final table of the Pearl River Poker Open.

But in the span of two hands after a fizzled deal, Simpson went from a quiet mouse to a roaring lion in the Ante Up Poker Tour series in Choctaw, Miss., taking the title after a quick heads-up deal with most of the chips in his stack.

“I’m just tickled to death. Here I am talking to you all calm, and inside I’m ready to bust. And I was about to bust that tournament, too,” Simpson said with a chuckle after agreeing to give David Bradshaw of Atlanta about $6,000 of first-place money so he could lock up his first major title. In addition to $24,135, Simpson earned his way on to the cover of Ante Up Magazine and a seat in the Main Event of the 2019 Ante Up World Championship at Thunder Valley Casino Resort near Sacramento, Calif.

“I never won one of these, and I wanted that ticket to go out and play (in California),” Simpson said of the reason he was quick to take the deal after he eliminated Lakisha Slaughter of Atlanta in third place. “I wanted to be first place one time. I even have to work tomorrow. I drive a truck for a living. I’m set to go to work at 6 a.m., but I wasn’t going to let anyone know that.”

The two hands that defined Simpson’s main event run at Pearl River Resort came soon after the final three couldn’t reach an agreement on an ICM deal when Simpson was low on chips. Simpson really wanted the Ante Up World Championship seat, Bradshaw, chipleader at the time, was willing to sell it for less, but Slaughter ultimately decided to play on.

Not too much later, Simpson got it all with Slaughter with ace high against her flopped pair of eights and turned an ace to more than double up. Almost immediately after, he got it all in against Bradshaw on a jack-high flop holding ace-jack to Bradshaw’s king-jack to take a commanding chip lead that he never relinquished.

“What made me more aggressive was when we couldn’t work the deal,” said Simpson of Enterprise, Miss. “I just more or less decided that since I was close to finishing in third place, why not just play it out? That aggressiveness really captured the tournament for me.”

It was a marked change from Simpson’s style all day. He came into the final day 11th in chips, and came to the final table second in chips with a strategy to play as tight as possible.

“I tried to stay as quiet as I could and concentrate on what I needed to do and more or less listen to what was going on around the table,” Simpson said.

For Simpson, who plays poker as a hobby on weekends, mostly at Pearl River but also elsewhere in Mississippi, the Main Event title topped off the best week of poker of his life. After having no luck in the first two events of the series, he took fifth in Event #3, improved to runner-up in Event #5 and won Event #7 before his Main Event success.

“This is the first time I took a week’s vacation to play so I was building up to this,” Simpson said. “There was nothing on my mind but playing poker and enjoying myself. It worked mighty well.”

The Pearl River Poker Open, run by tournament director Paul Dutsch and his crew that is well known throughout the South, featured eight other events, including a $350 buy-in, $100,000 guaranteed multi-day kickoff event that attracted 387 entries and was won by Pearl River regular Tara Snow. Other events included a seniors event, a bounty event and two monster stack events.

This year’s event was in a new home, as the legalization of sports betting in Mississippi led Golden Moon to turn the event’s former home, the Timeout Sports Lounge, into a full-service sportsbook that was brimming with action all series long. The series moved to the Center Bar, the appropriately named center of the action at Golden Moon. The venue proved to be brighter with plenty of TVs and convenient bar service, and Pearl River kept players from being hungry on the final day by rolling in a complimentary pho bar.

The Pearl River Spring Classic will be the next major event at Pearl River Resort, with a tentative date of March 13-24.