The History and Evolution of Video Poker Machines 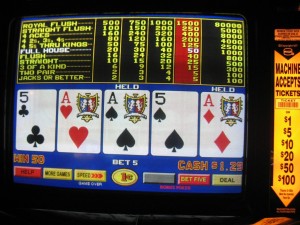 Video poker is one of the most popular games played by some of the most experienced and knowledgeable casino gamers in the world. One of the main reasons behind its success is its simplicity. It plays like a traditional slot machine, with gamers given the chance to make their own decisions during each hand. Surprisingly, video poker didn’t used to be as popular decades ago as it is today – and that was in an era when the range of games on offer was inferior.

Introducing the first poker machine
The original video poker machine dates back all the way to the late 19th century. A New York company called Sittman and Pitt launched a gaming machine based around Texas Hold’em poker. It was designed to feature five reels – or drums as they were known back in the day. Each individual drum displayed 10 playing cards apiece. Players would pull the lever to start a new game and the drums would spin and eventually stop on a playing card. Once all five drums had finished spinning, players would have a poker hand to play with. You might be wondering – aren’t there 52 playing cards in a standard deck? You’d be 100 percent correct. For some reason, the machine’s developers opted to remove the jack of hearts and the ten of spades to drastically cut the chances of players landing a royal flush by 50 percent.

Just a few years later, the grandfather of the slot machine, Charles Fey, opted to design a unique poker gaming machine that paid out a maximum 20-coin jackpot for landing a royal flush. The “Card Bell” was Fey’s original poker-themed machine, but then he would go on to develop the “Skill Draw” machine, which incorporated a hold feature for the first time. Players were given the option of holding at least one active playing card and spinning the rest of the drums again with the aim of enhancing their hand. Sittman and Pitt also manufactured five-card draw poker machines of their own in the early 20th century.

The idea behind incorporating a hold or draw feature within their poker machines was to give some of the power back to the player. Decision-making made these machines far more engaging to players, particularly more so than the earliest slot machines that were based on complete luck. At the time, the U.S. was going crazy for both types of machines made by Fey, as well as Sittman and Pitt. Poker was the most popular form of card game in the early 20th century too, which was a major bonus.

Video poker goes electronic
Did you know that during this era, all forms of gambling were largely prohibited in all U.S. states? Therefore, those players who would land a winning hand against the machine would be rewarded with free drinks or cigarettes and cigars to enjoy in the bar post-game. As technology steadily improved, video poker machines became all the rage in the 1970s. The name Dale Electronics is synonymous with the inaugural “Poker-Matic.” Las Vegas casino floors were jam-packed with these machines at the time.

A short while later, a man named Si Redd tried to encourage his employer, Bally’s, to trial run a betting terminal game Redd called “Video Poker.” His proposal was rejected by Bally’s, however he went on to create his own company – now known as IGT – to lead the way with video poker terminals and become the undisputed “King of Video Poker.” The first of which was designed for players to land a hand equivalent to two pairs or better to beat the machine. This proved too challenging for players, and once the machines were changed to a “Jacks or better” rule, the interest in video poker went through the roof as an alternative to Texas Hold’em.

As the years went by, land-based casinos wanted to ensure video poker was proving profitable before scaling it up en-masse. Machine developers subsequently sought to ascertain the “house edge” of each machine, to help casinos quantify the amount of money they would likely make on each terminal. Today, the ability to calculate the house edge of every kind of video poker game has seen a raft of game variants appear, from Bonus Poker to Deuces Wild. Although there is no definitive “cheat sheet” to help you win at the video poker machines, there are strategy tables that can help you determine how many cards to hold and how many to discard when playing maximum coins.

Understanding house edge
Video poker machines have a much lower house edge than a slot machine, for example. While land-based casinos can take as much as 20 percent with slots, video poker machines are different. Over the years, some clever video poker players have managed to make long-term profits from certain machines. That has dwindled somewhat in more recent times as casinos take a firm grip on proceedings, but the house edge is still very low at between 0.25 percent-5 percent per machine.

In the U.S. especially, video poker machines are still very much a way of life. They are installed at fuel and train stations as well as being easily accessible via iGaming websites. Video poker has come a long way from Sittman and Pitt, and gamers around the world have benefited hugely as a result.