The Ever-Changing Landscape of Poker 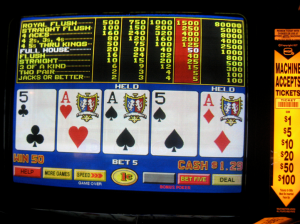 Since the dawn of poker, the game hasn’t changed all that much, but it’s fair to say that the landscape and environment surrounding the game has gone through some significant changes. From the first slot machines that used poker hands as winning combinations to the smartphone apps of today, there have been some incredible innovations throughout history. Today, we take a look at some of the best and most groundbreaking poker innovations that each had a profound effect on the game.

First up, it’s the slot machine. At the time of its creation back in 1894, coin-operated machines were already on the go. But these were mostly balanced coin machines that paid out if the coins fell from their precarious position. Charles (August) Fey’s invention, however, took the most widespread card game of the day and incorporated it into his first slot machine. Of course, you couldn’t play poker, but to win you had to display a winning poker hand. It was simple, but it got the whole world thinking about how we could use machines to play the game we loved.

It wasn’t until the late 70s and early 80s that we finally managed to get the single-player version of draw poker that we all wanted, thanks to Si Redd who worked for Bally Manufacturing. He pitched the idea of Video Draw Poker and the executives laughed him out of the room, letting him take the patent with him. It was a big mistake as by 1981, video poker was one of the most widespread coin-operated games in casinos across the world.

Redd changed the landscape forever as he introduced the world to the idea of playing poker as a video game. Needless to say, dozens of gaming companies jumped in on the action and by the 90s, video poker games were a dime a dozen on gaming consoles and personal computers. But again, the poker-playing public wanted more, and with the inception of the Internet, they got what they wanted.

Online poker was born in 1998 when the first game took place on Jan. 1. It wasn’t quite a watershed moment nor the groundbreaking event that many hoped it would be. Online poker was met with no small amount of derision, with many poker pros laughing it off as a bunch of newbies pretending to play poker. It wasn’t until Chris Moneymaker won the WSOP in 2003 after qualifying through an online satellite that the world sat up and took notice of the online game.

It was the moment that online poker platforms had been waiting, and the resulting boom was nothing short of stratospheric. Online poker has enjoyed huge success in the following years, with access to platforms becoming easier as players move to mobile apps to play a few hands. There have been numerous innovations regarding gameplay, but nothing quite so groundbreaking as Moneymaker’s win or Si Redd’s creation of video poker.

But perhaps that’s all about to change as we see new types of platforms coming into play. The most notable of late is an online poker platform designed on blockchain technology, which allows players to use a specific digital currency. CoinPoker is one of a kind in that it has embraced the public’s growing obsession with cryptocurrencies and like Si Redd did before, given them what they wanted.

It’s somewhat surprising that in a world dominated by all things digital, the casino and gambling industry is playing catch up. It’s what makes CoinPoker’s foray into the world of digital currency so impressive and potentially groundbreaking. Could this be another watershed moment for the industry? Only time will tell, but if it is, then remember where you read about it first.