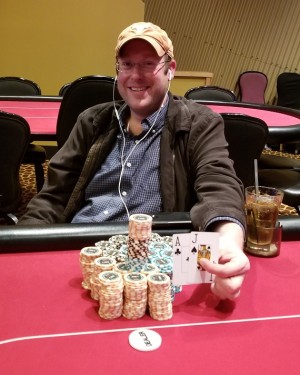 Jake Seale wants to bring the “Southern Gambler” back in style.

The 35-year-old who talked his way through the final table with a Maker’s Mark and water always in front of him took the title of the Main Event of the Pearl River Spring Poker Classic at Pearl River Resort in a two-way ICM deal. And perhaps more pressing than what he plans to do with the $27,000 top prize is whether a head gear change is in order.

“Do you think I should wear a cowboy hat?” Seale of Lumberton, Texas, said after agreeing to the deal with Kenneth Parker in the Ante Up Poker Tour series. “I, mean, I’ve had this Texas Longhorns hat for 14 years now. I think a cowboy hat says ‘Southern Gambler,’ don’t you?”

Seale, who had planned to play in the World Series of Poker Circuit event in Tulsa but decided instead to make the drive to Choctaw, Miss., for the first time, kept the final table lively, chatting with everyone, but no one more than Parker of Birmingham, Ala.

“I was in everyone’s head. That’s what I do,” Seale said. ”My strategy is half the time my hand is face up. It’s obvious what I have. If you try to take advantage of me, it’s going to go poorly for you It’s one of the hardest strategies to play, but I play it well. Think about how many big calls I made this tournament.”

Parker briefly inquired about an ICM deal when he took the chip lead three-handed, but Seale wasn’t interested at the time. After slowly chipping up against Parker heads-up, Seale decided to lock up the biggest tournament score of his life when Parker offered him not only equitable money, but also the cover of Ante Up Magazine and the seat in the Ante Up World Championship Main Event at Thunder Valley Casino Resort near Sacramento, Calif., this July.

“I thought I was going to be on the road back to Birmingham right after 1 p.m.” he said.

Seale had a big hand with 18 players left and never looked back.

“I had aces vs. pocket jacks that got me to a half million and after that, they couldn’t stop me,” he said. “I drove eight hours to get here. I’ve been running good and I came here with high hopes, I ran well enough and the cards favored me and I came out on top. And the cocktail service here is great!”

Seale, who recently had two runner-up finishes at a RunGood Poker Series in Shreveport, La., plays in a home game and also plays the quarterly tournaments at Coushatta Casino in Louisiana.

“I kind of grew up there. I love the folks there,” he said of Coushatta. “I used to play semi professionally. I always used poker as supplemental income when I’m not losing it ‘investing in dice futures.’ Now I’ll be able to play more tournaments.”

Cash game action, under the direction of poker room manager Denise Dahl, was heavy on the weekends with a variety of games.

The Pearl River Poker Open played out in the upscale Time Out Lounge, which features more than a dozen TVs so players didn’t miss any of the exciting college basketball action while playing in a comfortable and private area. Owned and operated by the Mississippi Band of Choctaw Indians, the two casino-resorts at Pearl River together offer more than 1,000 hotel rooms, 2,400 slot machines, 59 table games and a 14-table poker room, as well as the Dancing Rabbit Golf Club, Geyser Falls Water Theme Park and numerous dining and entertainment options.

“We were pleased to see many Southern poker notables at the Pearl River Spring Poker Open,” said tournament director Paul Dutsch. “As word leaks out about this property, their free tableside food service, incredible hotel rates, comps for tournament entry and guaranteed events, it’s hard not to get excited. Both of the $100,000 guaranteed events exceeded our expectations.”

The Ante Up Poker Tour will return to Pearl River Resort for the Pearl River Poker Open Oct. 25-Nov. 4.