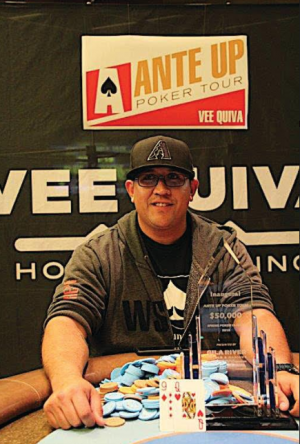 What an Arizona debut for the Ante Up Poker Tour and Vee Quiva Hotel and Casino! The Laveen property saw 348 hopefuls show up March 22-24 for the inaugural Ante Up Spring Poker Classic, competing for the winner’s share of the $50K guaranteed prize pool. And that winner was Alex Flores, who won $12K, a custom AUPT champion’s jacket, a sweet trophy and a seat at the upcoming main event of the Ante Up World Championship at Thunder Valley Resort Casino in California.

After it was over, Flores was nearly poetic with his feelings.

“This was amazing,” the Phoenix resident said. “I feel like I finally made a mark in the poker world. I stand by the motto that if you don’t fight for what you want, don’t cry for what you lost.”

Ante Up Arizona Ambassador Chris Cronin, who was runner-up in the event and pocketed $10K, said Flores earned this title.

“Alex was definitely the most aggressive player at the final table and a very deserving champion,” Cronin said.

Four Day 1 flights produced 123 players for the final day and halfway through the third level that number was trimmed to 60. One hand of note: On the money bubble, Cronin called an all-in with pocket sixes and faced K-K. The flop brought sets for both players and the case six landed on the river to put the remaining 40 players in the money.

Once the final table was seven-handed, the players chopped as James Pausch, Dustin Panoff, Matthew Seitz, Lance Foster and Jose Gonzales-Remigio each pocketed $8K for third-seventh. Kevin Nguyen was eighth ($2,610), Theodore Benner was ninth ($1,523) and Kevin Bobzien was 10th ($1,088).

“I wanted to do something big here at Vee Quiva, and partnering with Ante Up was the perfect fit,” he said. “I feel it was a super successful event. We set out to have the largest tournament payout that Gila River has ever had, and we accomplished that goal. This tournament will continue to grow and offer even more to our players as we move forward. I would like to thank everyone from our dealers, floor staff, marketing department and players that came from out of town as well as our faithful regulars.”