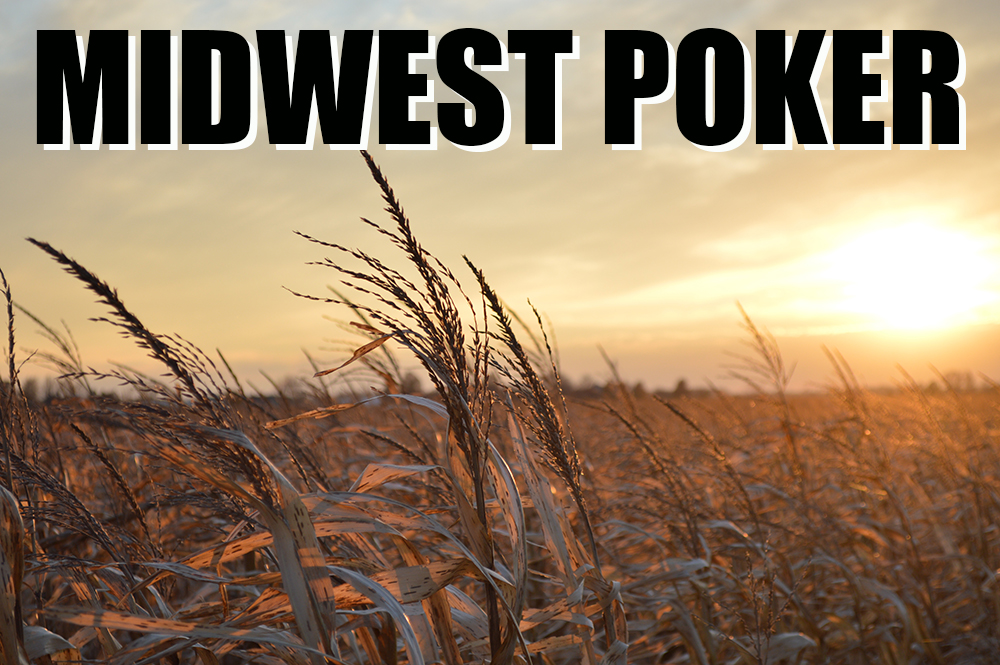 “I haven’t scooped a tournament in forever, just always get deep but hard to break through, especially in these bigger ones with good players,” Amer said after the win. “It was a well-run tournament. It was a good time. Everything at Jack Cleveland was great. Everyone was nice and professional.”

Amer often can be found playing PLO cash games when he’s not spending time with his wife and two young children. “I’ll take care of about $50K to bookies, I’m a big sports gambler,” Amer said jokingly when asked about what he’ll do with the six-figure score. “No plans, probably put it in the bank and keep it rolling.”

MEADOWS CASINO: The Heartland Poker Tour returns to the Washington, Pa., property March 15-26 with a $1,100 buy-in. Satellites will be offered and details are at hptpoker.com.

As reported in the February issue of Ante Up, the largest bad-beat jackpot in history hit Jan. 16 for $1.068M at Motor City Casino. So why report it again? Because if you’re bummed you missed out, don’t fret. The bad-beat jackpot (quads) was a whopping $533K at press time.

MGM DETROIT: The poker room hosts two bounty tournaments each week: a $220 event on Saturdays at 2 and a $120 event on Sundays at 2.

FIREKEEPERS CASINO: The Fifth Sunday $500 tournament is April 29 at 10 a.m. Registration opens seven days in advance of each tournament.

“I’m just happy to be here,” Ronconi said with a big smile after he won the title. “It was amazing.”

Ronconi, the COO of a local investing company, has surfaced as one of Chicagoland’s top players, assembling $1.4M-plus in career earnings. He also had the best cash among Illinois players at the 2013 WSOP main event with a 54th-place finish.

Ronald Burnes won the $300 seniors for $12K-plus as the prize pool was just short of $50K with 198 entries. Rodney Clark won the $200 seniors for almost $4K and a $1K HPT package. HPT’s new $200 seven-game mix ended with a five-way chop. Jason Mirohnick and Gary Herstein cashed for $2,646 with Mirohnick listed as the winner. The HPT returns to East Chicago on May 3.

TROPICANA EVANSVILLE: The MSPT kicked off Season 9 with Craig Smith winning the $350 regional for almost $25K. The 658 entries were the largest for an MSPT regional and it had a prize pool of $190K-plus.

“I wasn’t inclined to chop, but everyone else wanted to,” Smith said. “I usually don’t mind chopping three ways, so when I realized I would already be getting three-way money at that point, it made sense, especially when I learned I’d get the title as well.”

MESKWAKI CASINO: The MSPT returns March 17-25. There will be satellites leading up to the $300K guarantee main event. This event always is popular event and great cash games are a result. Recent MSPT events at Meskwaki nearly breached the $500K payout mark.

HORSESHOE COUNCIL BLUFFS: The World Series of Poker Circuit runs March 29-April 9. There will be a dozen ring events with various buy-ins.

PRAIRIE MEADOWS: There will be a $200 WSOP main-event satellite March 18. Top prize is a $10K entry and $2K for expenses.

When the final table began, Bloomberg had about 10 percent of the chips and Cheam Moua had a commanding lead with 2.328M, or 39 percent of the chips. But Moua was unable to keep his momentum and exited in sixth place.
At that point, Bloomberg had the biggest stack when the table agreed to a five-way ICM chop, which gave him $20,895. This is Bloomberg’s third largest career cash, increasing his lifetime earnings to $120,946.

CANTERBURY PARK: Dagoberto Oyarzabal of Chanhassen, Minn., captured the top spot of the Cheap and Deep Tournament in Shakopee. Oyarzabal started Day 2 in the middle of the pack of the 90 returning players.

The $275 event featured five Day 1 flights with players able to take their best stack forward. It garnered 538 runners for a $118,360 prize pool.

HO-CHUNK GAMING: The poker room at the Wisconsin Dells property will close on Mondays and Tuesdays.
The Tuesday daytime tournament will be moved to Wednesdays.

In addition, the room is doing away with its bad-beat jackpot. Any funds will be redirected to other poker room promotions.

On Dec. 4 at 2 p.m., five players opted to play one more hand before breaking the game.
John Willems wound up with aces full of kings and was beaten by the quad kings of Joe Wells.
The former received $23,216 for having the losing hand, the latter $11,608 with the winner, and the other three players got a $7,738 room share.

POTAWATOMI HOTEL AND CASINO: Industry veteran Ken Lambert, former regional director of operations at Beau Rivage Resort & Casino and for the Heartland Poker Tour, has been named the poker room manager at this Milwaukee property.

He takes over from interim manager John Doyen, who spearheaded the room for a year after the departure of former manager Jeff Gemini.

If you play poker in Central Wisconsin, you’re probably familiar with 51-year-old Scott Kunkel, who runs a Facebook page devoted to poker in his region. Kunkel, a small-business owner selling fireplaces, is a poker aficionado.

When and how did you learn to play poker? As a kid, I learned how to play poker from my Uncle Joe. I started to play online as 2Hotti on PokerStars in 2005. I’m a non-conformist so I decided to spend six months teaching myself how to play. After that, I bought a number of poker books. In 2007, I found out there were live poker games and I started driving up and playing at St. Croix Casino in Turtle Lake.

What’s your proudest poker accomplishment? My proudest accomplishment was finishing 11th out of 1,272 runners in the first WSOP Circuit event held in Wisconsin. My nephew, Ben Rock, and I went down for the week and had an awesome time. However, my favorite poker memory was from 2008. I was in Atlanta for a convention and I hopped in the PokerStars Nightly $162 tournament. I ended up taking fourth out of 884 for $8,407.

What’s on your poker bucket list? As a player, my bucket-list moment would be to win the Wisconsin State Poker Championship that’s held every November in Milwaukee. I’d like to be heads-up with Minnesota’s Robbie Wazwaz in an epic battle with all of my fellow Central Wisconsin poker friends back home watching on the live feed.
— Chad Holloway