The Odds of Becoming a Poker Professional 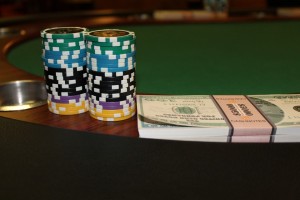 You’ve probably heard of or observed the likes of Antonio Esfandiari, Erik Seidel, Daniel Negreanu and Phil Ivey in action and wondered how they got to where they are today. If you’re speculating on the likelihood of turning a poker hobby into a professional career like them and what it involves, then read on.

Poker Players Research defines a regular poker player as playing at least one game per month and estimated that “regular” players accounted for 6.8% (40 million) of the global adult population at the time (roughly 5.9 billion) and 10.1% (23 million) of the adult US population. It is estimated that these numbers are increasing, especially with the growing popularity of online poker. However, the truth is that for most of these players, it will remain a hobby because for better or worse, it’s just not that easy to become a professional poker player.

But why exactly is it so difficult? Some people assume that an individual must have amassed at least a small amount of wealth in order to have any material success. While this is true to a certain extent, it does not necessarily guarantee success either, as socialite and multi-millionaire Dan Bilzerian has commented in the past: “I had a style where I could make a lot of money if I had self-control”, in reference to going broke before winning back his fortune. So it doesn’t necessarily depend on your bank balance (though it does help to have a healthy one), and also doesn’t depend on luck alone, either – what it requires is a disciplined approach.

Self-discipline and determination is something which Daniel Negreanu believes is tantamount to success in this bittersweet business. He maintains that constant practice and studying of the game is necessary. Negreanu estimates that in order to reach a goal of $100,000 in a year, starting with No Limit Hold’em at $2-$5 figures, you would need to dedicate 120 hours per week to the business, and if you want 8 hours shut eye per night, an extra 56. This adds up to more hours than there are in a week and it means; a) getting less sleep and b) not having a social life. Harsh. So what other alternatives are there? You could lower the goal for one, but to how much?

The bottom line here is: how much can you comfortably live on. You need to assess your finances carefully, taking into account factors like how much you have left to pay on your mortgage or how much you need for rent and other expenses, and how much you have in savings. Then, once you’ve assessed how much you need to earn in one year, you can start building a case to demonstrate whether the figure you’ve reached is feasible or not. One of the ways you can do this is by keeping a track record of your wins and losses. Using your track record, you would calculate your profit for a certain timeframe (some experts recommend at least 2,000 hours of play). From the resulting figure you can then go on to calculate your average return on investment to work out whether or not you need start playing higher stake games.

But can you afford higher stake games? It all depends on your skill level and one other crucial aspect – your poker bankroll. The basic premise of a bankroll is that it acts as a safety net for any losses which may occur, and that you don’t play using any money that you can’t afford. A bankroll is a must for any player looking to turn professional and will probably come from your savings.

So far, the numbers and the facts hint that success could be largely dependent on your current track record, your skill level, and your current financial position. Also, while there is a real chance to make it as a poker professional, it is probably better to start with free online poker as it gives you the freedom to practice your hearts’, diamonds’, spades’ and clubs’ content. Then, as your skill level improves, you can start playing for real money.

According to Poker Players Research, studying poker to become a skill-based payer is a trend gaining increasing popularity in the US and Canada with 3.8% and 3.2% of adults playing for money online. It is also becoming popular across the globe with 3.2% of adults playing in the UK and a whopping 6.2% in Scandinavia. Regular play offers a chance to implement in-game strategies without having to worry about retaining your composure (not giving away clues to bluffing via body language and facial expression) and reading other players, before playing traditional face-to-face games in clubs or casinos.

Like a lot of careers, making it as a professional poker player will require dedication as well as the cultivation of an unbreakable mental fortitude. As “Kid Poker” Negreanu puts it himself: “There are many who have ‘it’…but most will fail´.” There will be upswings and downswings on the bankroll, but success is not impossible and progress through practice, guaranteed.