Coushatta Casino Resort hosted the its Fall Classic on Sept. 24-28 in its 20-table poker room. The short series culminated with the multiday $1K main event, which drew 109 players, paying 12 spots. In the end, J.P. Kolb of Louisiana and Matt Beisner of Texas chopped for $19,665 each.

“I spoke with many of the tournament players and most seemed pleased with the series overall,” tournament director Danny Wade said. “This was a little different than our normal7 Clans Poker Series that Coushatta holds periodically, but I feel we met our goal of offering variety to our players. We are looking to host some bigger buy-in tournaments in December, so keep a lookout for that on our website and mobile app.” 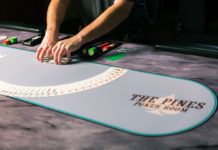 Louisiana casinos to reopen, but not poker rooms