The Mohegan Sun hosted an “Over the Edge” charity event on Sept. 5 to raise awareness for Special Olympics Connecticut.

The program provides sports training and competitions, globally and statewide, for more than 14,000 athletes and Unified Partners each year. Mohegan Sun prize packages were given to those who met various fundraising amounts as well as a chance to rappel 34 stories of the Mohegan Sun tower.

Among the top fundraisers was Team “Mohegan Sun Poker” led by Rebecca Carabino, the tournament manager.

“This is the fourth year we’ve hosted the event,” said Josh Zuckerman, Mohegan Sun’s poker room director, who also was part of the team. “Our venue is one of the most popular and the campaign was able to raise about $108K this year.”

Over the Edge will return to Mohegan Sun in 2015. Details can be found on soct.org.

In tournament news, Mohegan Sun just announced its Fall Poker Showdown series will run Nov. 19-23 with $220K guaranteed. See the ad in our October issue for schedule and details. 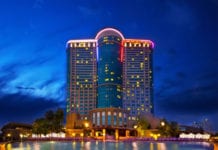 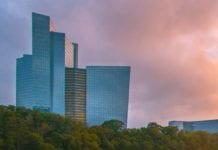