Parx Casino near Philadelphia hosted Big Stax V (Feb. 20- March 10), and for a refreshing change, there was no chop at the final table of the main event. That doesn’t mean there wasn’t talk of a chop, but soon after that discussion, Brad St.Vincent lost his lead and busted with K-10 against Emad Alabsi’s K-K. Then Alabsi’s 5-7 sent Henry Guttman home with $102,796 in second place as Alabsi earned the championship trophy and $164,469.

Matt Glantz, Parx Ambassador and tournament designer, made his first appearance at the final table, finishing sixth in the main event. Other Big Stax patrons made their first return of the year bringing their A games. Among them was Stephanie Hubbard, who made the final table in the $1,100 Big Stax IV main event.

“The main being $1,500 drew less of a field,” Hubbard said. “I think less bullets were played than the past. I think $1K would have had more of a turnout for the region.” The main event with three heats of Day 1 gathered 465 players.

BALLY’S CLOSES: Bally’s recently closed its longtime poker room after Wild Wild West’s launch of its renovated 64-table room. The area is between Bally’s and Caesars, which also closed its poker room late last year. The construction was kept confidential until late February. Caesars Entertainment is hoping to make the property the main poker area for the boardwalk patrons and improve the revenue against nearby competition.

The poker room features its World Series of Poker brand and Wi-Fi for its online partner, WSOP.com. Players get rake-back per hourly rate and nonstop promotions such as hourly $500 high-hand giveaways. The daily tournaments have great guarantees with huge overlays up to $25K.

WPT: Borgata hosts the WPT World Championship on April 8-26, featuring 51 events and a $5 million main-event guarantee. The series had been at the Bellagio the past 11 seasons. 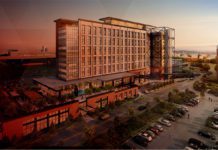