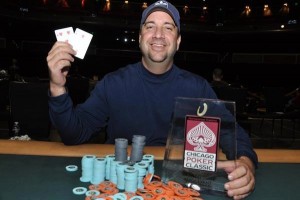 Players flock to Las Vegas every day to play poker and, of course, the game most come to play is no-limit hold’em. Sure, there are limit hold’em games, Omaha and mixed games. But overwhelmingly they come to play NLHE for small stakes.

Though bigger NLHE games are available, the bread-and-butter game of most players and most poker rooms in Vegas is $1-$2 or $1-$3.
Which should you play? Is there a difference, other than the obvious? Depends. Every poker player who frequents the Vegas rooms has an opinion on where the soft games are. Of course those opinions don’t always agree, or stand up to actual experience.

I’ve played in rooms that have reputations for soft games and come away with a lot less money than when I entered. On the other hand, I also tried the rooms known for tougher games and have left with a fat wallet. My experience tells me it’s not the room, it’s the players at your particular table, regardless of the room, that really matter. Oh, and the cards may have something to do with it, too.

Thus, a $1-$3 room is not necessarily any tougher than the $1-$2 room just down the Strip. But players should realize they’re risking more money if they choose the slightly bigger game. Of course, the rewards will be greater when you’re running well.

Both varieties are easy to find on the Strip. Popular $1-$3 games are available at Aria, Wynn, Caesars Palace, Treasure Island and Riviera. The Bellagio recently changed $1-$2 to $1-$3.

Most of the locals rooms spread $1-$2, though three rooms near the Strip (Rio, Palms and Hard Rock) offer $1-$3. The busiest locals joint near the Strip, the Orleans, features $1-$2. There are plenty of options for your no-limit dollar.

VENETIAN: The $2,635 main event at Venetian’s Deep Stack Extravaganza was settled April 25, when Jeremy Ausmus of North Las Vegas won the first-place prize of $121,853. Ali Fazeli of Las Vegas was the runner-up and took home $75,142, with Ryan Welch of Henderson earning third-place money ($50,771). More than 220 entrants resulted in a prize pool of more than $507K.

The Venetian confirmed the dates (Sept. 19-26) of its Deep Stack Extravagaza 3.5, the shorter version of its popular series. The Venetian thinks the two-month break after the tournament-heavy summer season will bring in players eager to get back into tournament mode.

CAESARS: The Hoops and Hold’em Tournament at Caesars Palace wrapped April 7 with Duane Alan Sirr of Canada claiming the $560 championship event. Sirr took home $11,495, while Sweden’s Goran Lind was second ($8,046). Seventy-nine players entered for a pool of a little more than $38K.

The poker room’s Summer Mega Stack Series (May 24-July 14), will have more than $2 million in guarantees, including a million-dollar guarantee for the $1,080 main event, which begins July 9. The main event will run until July 14 if needed. Most events will be one-day tournaments. Call the poker room for details.

The Wynn has released the schedule for its Summer Classic (June 7-26). The $5,180 championship event starts June 22.

GOLDEN NUGGET: The downtown poker room is trying to mix things up a bit with a new $6-$12 H.O.R.S.E. game. It spreads on Wednesday afternoons and has a $2 max rake and $60 minimum buy-in.

As part of its Grand Poker Series, the Nugget is partnering with AllVegasPoker.com and offering a rake-free, $100 no-limit hold’em tournament on June 7. Players start with 10K chips and 30-minute levels. The tournament will be the 18th official meetup for AVP, and previous rake-free tournaments have attracted as many as 300 entrants. The event is open to all players.

MGM GRAND: The poker room is offering a new daily 2 p.m. turbo tournament with 10-minute levels. A $50 buy-in gets players a 10K stack. Rob Moore, the room’s director of poker operations, hopes the tournament will appeal to players looking for a lower-priced, shorter tournament than the 11 a.m. and 7 p.m. daily events, which cost $80 ($125 on Friday and Saturday nights). MGM ran a few of these turbo tournaments in April and they proved to be popular.

BINION’S: Last issue I wrote about Binion’s starting regular “Super Saturday” events for a $160 entry fee. The guarantee prize pool for these events is $25K, not $250K, as first reported. The recent one in April was another success. More than 240 entrants resulted in a prize pool of more than $31K.

The week after that event, the regular $125 tournament at Binion’s had to be moved. It seems a couple who had met in the Binion’s poker room had rented out the tournament room for their wedding. I’m sure they’ll have many years of wedded bliss ahead of them, as long as they never play at the same table.