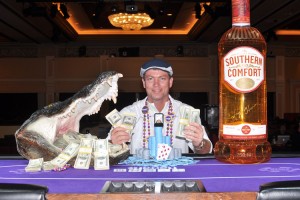 Ohio’s cash-game action remains hot while we all wait on bigger things. May’s $1,090 buy-in Hollywood Poker Open at Columbus is the biggest tournament in state history and will prove to be a vision of things to come as we await full-blown multiday events in our casinos. Until then, we remain a cash-game paradise.

HOLLYWOOD TOLEDO: Manager Peter Lau continues to offer a wide array of options. New promotions include triple-comp games of the week: Tuesday PLO $500-$2,000 buy-in; Thursday $3-$6 limit and Fridays $1-$3 PLO $100-$500. Also, if you’re a fan of stud, Fridays at 3 p.m. feature a $1-$5 spread game. There’s little doubt Hollywood Toledo provides players the widest game selection in the state. Also, if you’re a tournament player, there’s the only twice-a-day tournament action in the region. Speaking of tournaments, Frank Wyrostek, a 47-year-old warehouse manager from Toledo, won the recent $300 mega-stack event, pocketing $7,582 after beating nearly 80 players. Most of the entrants were from the Greater Detroit area as Wyrostek was followed by Hamed Cholash ($3,896), Steven Anderson ($2,422), Mark Dreshaz ($1,790) and Brett McCormick ($1,158).

HORSESHOE CLEVELAND: The bad-beat jackpot has been frozen at $149,398 with significant changes to its structure to be announced soon. There’s healthy cash-game action in hold’em and PLO. Nearly every night you can expect 16-20 tables with most being hold’em (two or three games of $2-$5). PLO ($1-$2) is spread daily and $2-$5 many days and every weekend. On nights with Indians home games, expect nice action. The final Sunday of each month hosts a $500 buy-in event that draws 70-120 players and is a good value to players with the money added by the casino.

HOLLYWOOD COLUMBUS: Chris Moneymaker, pro poker ambassador, appears monthly on the third weekend of the month (see website for details). In April, Moneymaker played cash games, did a meet and greet, held a free seminar and played the Saturday $240 tournament. This is the perfect opportunity to meet one of poker’s most notable and friendly players.

Manager Matt Dodd continues to bring variety and excitement to players with his poker-only rewards program and cash-game incentive programs. Hollywood Columbus features the deepest and most exciting hold’em in the state as buy-in rules allow players to buy in for 100 percent of the top stack at the table. Also of note in Columbus is the appearance of some nice cash-game action, featuring a $10-$20 game that runs most weekends and a big mixed game featuring rounds of $5-$10 NLHE, $5-$10 PLO and $30-$60 stud. Average stacks in the game are more than $3K.

HORSESHOE CINCINNATI: The room continues to show lively action. Manager Jason Newman has managed to create a regular $6-$12 PLO/8 game along with the predictable no-limit action. PLO action is strong with multiple games across $1-$2, $5-$5 and $5-$10 running regularly. Look for 12-18 tables on weekdays and a full 31 tables most weekend nights.

— Dan Harkenrider is Ante Up’s Ohio Ambassador. He hosts the Division of Poker and Chris Moneymaker radio shows. Email him at anteupdan@gmail.com and follow him on Twitter @DivisionofPoker.