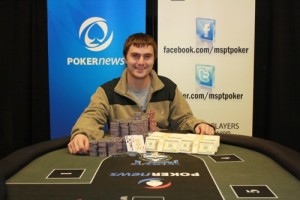 The World Series of Poker Southern Comfort 100 Proof National Championship kicked off on Wednesday as 126 players took to the felt at Harrah’s New Orleans for their shot at the first WSOP bracelet to ever be awarded on American soil outside of Las Vegas. After nine one-hour levels of play, just 62 survived with Harrah’s Rincon Casino Champion Valentin Vornicu and his stack of 203,200 leading the way.

Vornicu steadily built his stack throughout the day and added to it late at night when he eliminated WSOP bracelet winner Nick Jivkov. It happened in Level 9 (500/1,000/100) when Vornicu led out for 3,500 on a flop of

turned, giving Jivkov a flush draw, but the

completed the board, giving Vornicu quads. With that, Vornicu extended his chip lead and never looked back.

Remember, there were only three ways to get a seat into the prestigious tournament — 1. Either win a WSOP Circuit Main Event or become Casino Champion; 2. Earn enough points to finish in the top 60 on the National Leader Board; or 3. Be amongst the top 100 on the WSOP Player of the Year List and buy in for $10,000. Day 1 was comprised of all the Main Event and Casino Champion winners, 62 at-large qualifiers and 26 players who forked over $10,000 to buy in. Registration will remain open up to the start of Day 2, so the last number will certainly change.

The day started off slow and it took three levels before the first elimination to occurred. It happened when Brandon Fish, the Harrah’s Atlantic City Casino Champion, three-bet jammed with the

only to be called by Ping Liu, who had opened with the

One of the most feared players in the world, Vanessa Selbst, had her National Championship experience come to a close at the tail end of Level 4 (100/200/25). With 3,000 in the pot and a flop of

, at-large qualifier Josh Reichard checked and Selbst bet 1,500. Reichard woke up with a check-raise to 3,500, then moved all in after Selbst had three-bet to 6,000. Selbst called off for approximately 15,000 holding the

, but it was no good as Reichard had flopped a set with the

completed the board on the river to give Reichard quad fours for the second time in the National Championship, Selbst gathered her things, wished her opponents luck and exited the Harrah’s New Orleans theater.

In Level 5 (150/300/25), Cord Garcia opened and a short-stacked Matt Glantz moved all in for 4,675. When action reached WSOP bracelet winner Dominik Nitsche in the big blind, he moved all in over the top and drove Garcia out of the pot.

It was a bad spot for Glantz and according to the PokerNews Odds Calculator, he had just a 17.92% chance of surviving the hand while Nitsche was an 81.54% favorite. The

flop was no help to Glantz and dropped his chances to 8.38%. The

turn dropped it even further to 4.55%, but it also made a 9.09% chance of there being a chop. Unfortunately for Glantz, the

blanked on the river, and he was bounced from the tournament.

Day 2 will kick off at noon CST as the remaining field looks to play down to the final table of eight. Once registration is closed at the start of play, the prize pool and payout information will be released. Be sure to join the PokerNews Live Reporting Team then for that information as well as all the action from the Southern Comfort 100 Proof National Championship!