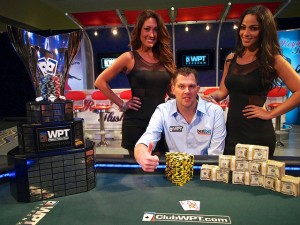 Day 5 of the 2013 World Poker Tour World Championship at Bellagio was one of the shortest in the tour’s 11-year history. The penultimate day of the $25,000 buy-in event began with eight players attempting to make the six-handed televised final table, and after two hours it was over. Former WPT champs Rocco Palumbo and Daniel Negreanu began Day 5 as the shortest stacks, and they were both eliminated, setting the stage for Friday’s final table. The winner will walk away with a top prize of $1,150,297, which includes a seat into next year’s WPT World Championship.

Chino Rheem will enter the final table as the leader with 5,495,000 in chips. He’ll be joined by Erick Lindgren, Matt Hyman, Brandon Steven, David Peters and Jonathan Roy, who can still claim the WPT Season XI Player of the Year award by winning this event.

Here’s how the final table will stack up:

Palumbo, who earned his seat into World Championship by winning the WPT Grand Prix in March, began the day with 22 big blinds but never found an opportunity to chip up. In his last hand of the tournament, Palumbo open-shoved 17 big blinds from the small blind with the

, and Brandon Steven called with the

. Palumbo was in rough shape, but the

gave him an open-ended straight draw and a flush draw. According to the PokerNews Odds Calculator, Palumbo was actually a small favorite to double up, but the

on the turn and

on the river failed to improve his hand, and he exited in eighth place for $101,935.

Negreanu was at his third straight Main Event final table when the day began, and his chances improved when he doubled his stack early on by winning four pots in a row without even getting to showdown. But after hitting a peak of around 1.2 million, Negreanu stumbled the rest of the day and was eliminated in seventh place.

Negreanu’s good friend Erick Lindgren handled the dirty work. According to the WPT Live Updates, Rheem raised to 85,000 (blinds 20,000/40,000/5,000) from early position, and Lindgren (button) and Negreanu (big blind) called. On the

flop, action checked to Lindgren, who bet 120,000. Negreanu then check-raised all in for 605,000, forcing Rheem to fold, but Lindgren called.

Negreanu flopped top pair with top kicker, but Lindgren’s overpair was best. The

That brought an end to Day 5 of the WPT Championship. The players will get a day off on Thursday as the final table stage will host the Super High Roller final table. While Roy’s run at the Player of the Year will be a key storyline, all eyes will be on Rheem and Lindgren who have faced a lot of scrutiny in the poker community over the past couple years.

Play will resume on Friday at 4 p.m. PDT, and PokerNews will have a full final table recap for you at the conclusion of play. Here’s a look at the payouts for the final table: