Omaha poker always has been big here in the Southwest 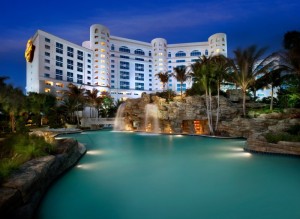 Omaha, which continues to gain popularity across the country, has long been a robust part of the southwestern poker backbone, and it never required a lot of hoopla to attract devoted players. Here’s but a taste:

BUFFALO THUNDER RESORT AND CASINO: Buffalo Thunder hosted a $100 Omaha/8 re-entry tournament April 14 with $100 per table added to the prize pool. Players got 5K chips and 20-minute rounds, plus they could earn 1K bonus chips for two hours of live play before the tournament started.

INN OF THE MOUNTAIN GODS: In Southeastern New Mexico, Inn of the Mountain Gods features a Tuesday night, PLOW the Competition Challenge each week at 6 p.m. Buy-in is $35, which brings 2K chips. An optional $5 dealer bonus gets you 1K more.

NORTHERN EDGE: Omaha is the featured game every Sunday, Monday and Tuesday at noon. Omaha straight flushes earn $25 and royals get $100. There’s also an Omaha bad beat (four eights) and as of press time it was worth more than $10K.

SANDIA RESORT AND CASINO: Sandia claims the most Omaha action in the state, with $4-$8 Omaha/8 games daily and $10-$20 games on Wednesdays. Tables fill rapidly, and Omaha is the first game to start nearly every weekday. Manager Billy Mallard said a younger crowd is playing Omaha recently, with lots of crossover. Sandia considers Omaha one of its prime games, and it has a bad-beat jackpot, as well as first and last Wednesdays, monthly $25 tournaments. Sandia also is seeing tons of action with its $2-$5 NLHE/must-move games.

SANTA ANA STAR CASINO: No Omaha tournaments here just yet, but a popular live Omaha/8 game runs on Saturdays and Sundays ($3-$6 with a half-kill). Saturdays are especially exciting with $100 hourly drawings starting at 2 p.m.

Santa Ana also has started a weekly 30-player hold’em freeroll in which players who reach the final table, split $3K. To qualify for seats in this tourney, players must log at least 20 hours of live play, but 30 hours gets them seats reserved. And look for that freeroll prize pool to grow soon.

It was a busy Thursday morning when I spoke with supervisor Rod Parish, who reminded me the ninth annual Arizona State Poker Championship is coming up in August. A thousand entries will mean a million-dollar prize pool so don’t miss that.

FORT MCDOWELL CASINO: Second Sundays at Fort McDowell feature a no-limit Omaha tournament, with a $5 buy-in, $5 rebuys and a $5 add-on. It’s so much fun, and a great way to learn Omaha.

HARRAH’S AK-CHIN: Tuesdays at Ak-Chin never disappoint, with its $25 Omaha/8 tournament at 7:30 p.m. You’ll get 1K chips, but you also can rebuy twice and a $10 add-on gets you 3K more. Plus a $5 dealer appreciation gets you another 1K. Early Bird chips may be earned by playing in a live game three hours before the tournament or three hours post tournament.

— Mary Bradley is Ante Up’s Southwest Ambassador. You can email her at anteupmary@gmail.com.