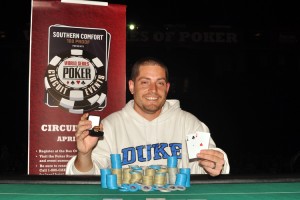 With 21 starting flights, Bicycle Casino’s annual Winnin’ o’ the Green was headlined by the Mega Million VI, $150 buy-in, $1 million guarantee. With nearly 6,300 entries plus more than 5,300 rebuys, the prize pool beat the guarantee by more than $250K. Congratulations to Andrew Miramontes, who captured the title and $200K.

Kevin McGuinness had four cashes in the series, including wins in the $235 Omaha/8 and the $150 PLO/8 events. With five cashes and two final tables, Henry Ferguson also had a stellar series.
Going through the results regularly for this column, I notice some names showing up with great regularity. Phong “Turbo” Nguyen had three cashes during Winnin’ o’ the Green, including second for nearly $120K in the Mega Million. This makes eight cashes this year, all at the Bike and Commerce.

With two Winnin’ o’ the Green final tables and four WOG cashes, tournament veteran Chris “Armenian Express” Grigorian brings his 2013 cash total to eight, all in Los Angeles. Not to be outdone is Los Angeles tournament staple, and the only lady to ever final table the main event of the World Series of Poker, Barbara Enright.

She also added three cashes, including winning Event 11 NLHE and a final table in Event 22 (Omaha/8). This also brings her cash total for the year to eight.

STATE CHAMPIONSHIP: Are you the next Ben Affleck? In the summer of 2004, just as the poker boom was hitting stride, Affleck won the California State Poker Championship at the Commerce Casino. Yes, that Ben Affleck. Back then, pre-UIGEA and Black Friday, it was a $10,000 buy-in. The late Amir Vahedi was at the final table.
This year’s edition kicks off May 1 at the Commerce Casino. It’s made up of 18 events with buy-ins from $125 to the $2,080 championship. Event 1 is $225 and is a $250K guarantee re-entry event with six starting flights.