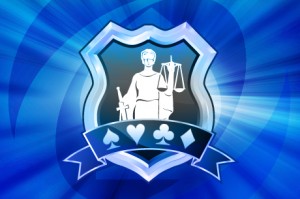 The 2012-13 World Series of Poker Circuit Horseshoe Council Bluffs continued on Sunday as 133 players from a 362-player field returned for Day 2 action. Five late registrants brought the final number up to 367 entries and created a prize pool of $550,800 to be distributed to the top 45 players. Not only did the money bubble burst on Day 2, but also the field was reduced to the final 10.

The man best position to capture the $121,177 first-place prize is Brendan Waite, who bagged the chip lead with 1.432 million. Hot on his heels is WSOP bracelet winner Blair Hinkle, who actually won the WSOP Council Bluffs Main Event back in the 2010-11 season.

Day 2 began in Level 13 (700/1,400/200) and it didn’t take long for players to hit the rail. In one brutal hand, Larry Ormson opened to 8,000 in late position only to have local pro Brandon Fish raise to 20,000 from the small blind. Ormson called off his stack and the players showed their cards:

flop was great for Ormson, but the

turn made him pause as Fish picked up a flush draw. Incredibly, and much to Ormson’s dismay, the

spiked on the river to give Fish the runner-runner flush.

Marshall’s demise came in Level 17 (1,500/3,000/500) when Arkadiy Tsinis opened for 6,300 from early position and Marshall, who was next to act, moved all in for 35,200. Action folded around to Cord Garcia in the big blind and he moved all in over the top, which prompted Tsinis to fold.

According to the PokerNews Odds Calculator, Marshall had just a 23.82% chance of surviving the hand. That jumped to 55.56% when the

flop paired his nine, though it did give Garcia a flush draw. The

turn made Marshall a 70.45% favorite, but then the

spiked on the river to give Cord a flush and the knockout.

When 46 players remaining in Level 18 (2,000/4,000/500), hand-for-hand play was initiated with the money bubble in full effect. It took awhile, but the bubble has finally burst. Not surprisingly, it came from a classic race situation.

It happened when Larry Scholl opened for 11,000 from the cutoff, leaving himself 76,000 behind. WSOP bracelet winner Robert Cheung, who had a bigger stack, moved all in from the big blind and put Scholl to the test. The rest of the tables had completed the action, and all eyes seemed to be on Table 33. Scholl looked at the tournament clock, saw that a min-cash was worth $2,490, and said: "Well, I don’t need $2,500." He then called.

"It’s a race," Scholl said as both players stood. Indeed it was, but not so much after the flop came down

. Scholl was still looking to improve, which became harder to do when the

turn gave Cheung a straight. "Give him a queen," Scholl told the dealer knowing full well he needed one of the two remaining ladies to stay alive. The dealer burned and delivered the

. It was paint, but not what Scholl needed. His elimination in 46th place meant that each of the remaining players were guaranteed a $2,490 payday.

It’s also worth noting that Doug "Rico" Carli, who ultimately finished in 32nd place for $3,057, notched his record 104th career WSOP-related cash, which is ahead of Phil Hellmuth’s 96 cashes.

, though Hinkle picked up a heart draw. The

turn was not what Hinkle needed, and neither was the

Even so, the final ten are an eclectic bunch. Of course, there’s Blair Hinkle, who won the 2010/2011 WSOP Circuit Horseshoe Council Bluffs $1,650 Main Event for $88,555 and was looking to take down the title for the second time in three seasons. There’s also the current Horseshoe Council Bluffs Casino Champ leader Mark Bonsack, who won a ring in Event #6 $365 Limit Omaha Hi/Lo for $11,254; “Cowboy” Ben Smith from Wisconsin, the elder statesman at the table; and Sean Small, who is 80,000 chips shy of the leader.

The third and final day is set to kick off at noon CST, and PokerNews will be on hand to bring you all the live updates from that event.