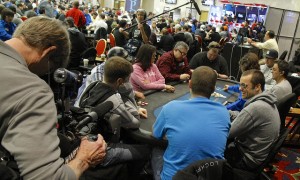 The Sycuan poker room is all revved up for its newest promotion, Hot Car Cool Cash, where one player will win a new Chevrolet Camaro. The promotion runs through April 26, and players can earn entries by making qualifying hands in any live game. They have several promotions running simultaneously, but drawings for this particular one will be Thursday-Sunday on the odd hours from 1:15 p.m. 11:15 p.m. These are semifinal drawings where two winners will be chosen to spin a cash wheel, win $100-$300 and earn an entry into the grand final drawings, which take place April 27 every hour from 1:15-10:15 p.m. The car drawing will be at 11:15 p.m. For more details call the poker room.

PALA: Manager George Arsenis was pleased with the turnout for his recent series.

“I just wanted to thank all of (the players) that supported the Winter Open and played in our RiverCard Championship on Feb. 9,” he said “I was overwhelmed at the amount of entrants we had going against another major tournament in the area.”

The RiverCard Championship tournament drew 230 players for a pool of more than $28K; first place paid nearly $9K. Ali Bolandi emerged as the eventual trophy champion with Javier Diaz taking second, but the players chopped the pool for $6,728 each.

Pala’s next major tournament will be April 27 at 10 a.m. It’s a $30K guarantee with a $260 buy-in (includes optional $10 staff bonus), 15K chips (10K without the bonus), 30-minute levels and re-entries for the first four levels. There will be satellites running throughout April, so please check the Pala website or call the poker room for dates and times.