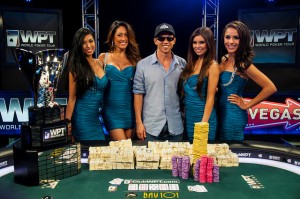 The Riviera is one of the oldest casinos on the famed Las Vegas Strip. Once it was in the center of the action, but the Vegas landscape has changed over the years and most of the action has moved south. Most tourists visiting town these days are likely to think the Strip stops at the Wynn, especially since its famous neighbor to the north, the Sahara, closed in 2011.

It’s been a challenge to keep the six-table poker room, near the Strip entrance to the property, busy. Riviera management and poker room manager Mark Selby are determined to make their poker room relevant again.

With that in mind, the Riviera just teamed with Team5poker for the Poker at the Riviera 2013 Extravaganza. Team5 is a poker tournament promotional company. It also sells poker products through its websites and stakes players in major tournaments.

The event with Riviera is under way and will culminate with a $5K freeroll May 19. Points toward the freeroll are earned for tournament and cash play.

The weekly tournament sponsored by Team5 is Saturday nights at 7 (12K chips, $125). Points toward the freeroll are awarded to the top-18 finishers in each tournament, with 20 points going to the winner.

The cash game is a new spread-limit game being offered for the first time at the Riviera for this promotion. It’s $2-$20 spread-limit hold’em. There is a mandatory $4 under-the-gun straddle in addition to the $1-$2 blinds. This is designed to induce action. Players get one point an hour toward the freeroll. The game is advertised as the lowest rake in town, $2 for the promotion and $2 for the house. To further encourage players to try the game, the first five players to buy in get $100 for $80. This game spreads Thursday and Friday evenings at 6 and Saturday at noon.

“The new spread-limit game is an extrapolation of the success we had running spread-limit games late last year,” Selby said. “It will be the biggest spread-limit game in town and should be an attractive proposition to no-limit and fixed-limit players. We’re hoping that spread limit will single out the Riviera in the ultra competitive Las Vegas market and players will be enticed to become regulars in our room.”

I asked him what the goals were for this promotion. “We’re always looking for exciting ways to welcome new players to the Riviera while offering new options for our regulars. I am and have always been confident that we provide a great guest experience in the poker room and am equally as confident that if you play here once you will become a regular player.”
The promotion is an attempt to prove the Riviera is dedicated to building up its poker room and its poker presence in a competitive market.

“Being on the north end of the Strip we have to fight harder for our customers than perhaps other rooms do,” he said. “However, by offering them something new and exciting, we hope to get new players down here and as said before, if you come here once, I am very confident you will return. Several rooms have made a name for themselves by breaking the mold and becoming synonymous with some sort of poker variant, such as the Venetian with its deepstacks. Hopefully spread limit will be what sets the Riv apart from the crowd and from that we can build and expand.”

DSE II starts March 28 and runs through April 24, with the $2,500 main event starting April 22.
CAESARS: The World Series of Poker Circuit came through Caesars Palace with the main event ending Feb 18. Florida’s David Tuthill outlasted a field of 744 to claim a first prize of $223,197, plus a seat in the national championship at Harrah’s New Orleans in May. A.P. Phahurat of Arkansas took home the runner-up prize of $137,603. Total prize pool was $1,116,000.

MONTE CARLO: The eight-table room at the Monte Carlo is one of the longest, continuously operating poker rooms in Vegas. It recently had a makeover, with new carpeting, new layouts and new high-def TVs giving it a bright new look. The room installed the Bravo Tracking System at all tables, so comps ($1 per hour) can be tracked there instead of at the front desk. There’s a progressive bad-beat jackpot, high hand of the half hour and day jackpots, and a monthly $18K freeroll (25 hours need to qualify). The room features three daily, moderately priced tournaments.

OVERHEARD: A novice poker player at a $1-$2 game limped into a pot with five others. The flop was queen-high, no one bet it. Turn and river were both low cards, again no one bet. At showdown the novice flipped over pocket kings and took in a small pot. Her bewildered husband, playing next to her, said, “Honey, why didn’t you bet?” She said, “Well, no one else was betting, so what was the point?”