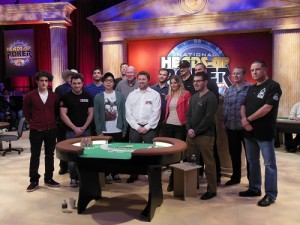 Battle Creek, Mich., was the scene of the first Michigan stop of the Mid-States Poker Tour, which visited Firekeepers Casino on March 7-10.

Satellites began running a month ago for the $1,100 main event.

“This is probably the smoothest ‘first-time through’ that we’ve had on the tour,” said Chris “Fox” Wallace, who narrates the online final-table broadcast. The tour returns to Firekeepers on Aug. 17.

— Frank Panama and Gambit Gras are Ante Up’s Michigan Ambassadors. They host the Michigan Poker Monster weekly podcast at mipokermonster.com. You can email them at anteupmichigan@gmail.com.