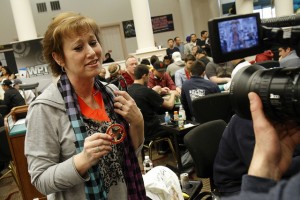 Dover Downs Hotel & Casino in Dover, Del., will run three satellite tournaments for the Ante Up Poker Tour World Championship. Tournaments will be noon on April 21, May 19 and June 23. Buy-in for each is $130, and late entry will be accepted until 2 p.m.

First-place wins an Ante Up Poker Tour World Championship package, which includes seven nights all-inclusive accommodations at the Hard Rock Punta Cana for two people, $750 in resort credit, one $1,100 main-event entry and $2,000 in cash. Cash prizes of $200-$1K will be awarded for players who finish 2-10.

The AUPT World Championship will be July 28-Aug. 3 in the Dominican Republic. The series features 14 events with buy-ins starting at $115, culminating with a $1,100 main event, the champion of which will be featured on the cover of the September issue of Ante Up. For a full preview, please turn to Pages 38-41 of our April issue.

Dover Downs also will host five tournaments, each with a $25 buy-in, with winners getting an oceanview Ante Up cruise package for two. Players who finish 2-10 in each tournament will win $50. Tournaments start at noon on April 7, May 5, June 2, July 7 and Aug. 4.

On March 5, H.B. 486, a bill that will allow Marylanders to host and play in home poker games had a hearing in front of the State Assembly Ways and Means Committee at the State Capitol in Annapolis.

PPA activists Jim Hudson and Brian Bohlayer testified on behalf of H.B. 486 along with Rep. Kirill Reznik, who sponsored the bill. Marylander and 2005 World Series of Poker Main Event runner-up Steve Dannenmann submitted written testimony in support of the bill.

Many members of the committee mentioned they regularly play in home games and expressed their desire to see H.B. 486 pass. After the hearing, Reznik met with the PPA Director of Grassroots and External Affairs Drew Lesofski. He said this bill was expected to pass out of committee quickly and head over to the Maryland Senate in early March. Reznik believes H.B. 486 has a good chance of passing the Senate and making its way to the governor’s desk for signature.

— Michael Young is the Ante Up Ambassador for the Mid-Atlantic area. Email him at anteupmike@gmail.com.